Will Burrard-Lucas added an addendum to the blog post that started it all: "For clarification, I am not claiming that these are the first photos of a black leopard taken in Africa. I do however believe that they are the first high-quality camera trap photographs." 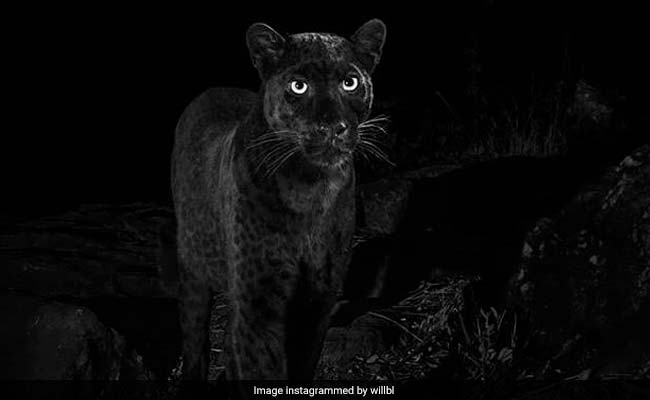 After days of painstaking photography in a Kenyan wildlife preserve, Will Burrard-Lucas checked his camera and found his dream shot - a stunning shimmer from the eyes of a black leopard, an extremely rare find in that part of the world.

Thrilled, he posted the photos to his blog, his Twitter and his Instagram, blasting the news out to a combined 190,000 followers. These initial posts set off a chain reaction of sensational headlines.

"Ultra-rare black leopard is photographed for the first time in 100 YEARS in Africa," the Daily Mail trumpeted.

There was only one problem: They weren't true.

Burrard-Lucas, in an interview with The Washington Post, stressed that his photos, along with footage in the same area captured by San Diego Zoo researchers, did announce a breathtaking moment - just not quite the one that was then rocketing around social media, fueled by exaggerated media reports.

The recent images - taken at the Laikipia Wilderness Camp - were actually the first in nearly a century to document the rosette patterned-speckled coat of an African leopard, confirming existence on the continent of the genetic mutation that makes black leopards, well, black.

The first picture I managed to capture of the African black leopard... #Camtraptions #cameratrap #blackpanther

Those headlines turned a significant yet carefully parsed achievement into a social media moment of mass confusion, helping, Burrard-Lucas said, to spread the false notion that black leopards haven't been seen or photographed in Africa in a century.

That's not true. Phoebe Okall, a photographer with the Daily Nation, photographed such an animal in 2013 at the nearby Ol Jogi Conservancy, the paper reported. And after the Laikipia images were released, the Ol Ari Nyiro Conservancy produced a high-quality image of a black leopard taken in 2007, National Geographic reported.

The difference, Burrard-Lucas noted, was the evidence needed to make a scientific judgment call. Researchers need to see the melanism, the genetic mutation, but the coats appear black to the naked eye (and the camera lens) during the day.

"But infrared imagery reveals the leopard's iconic rosette patterns at night," the San Diego Zoo said in a news release.

Other people clearly saw black leopards in the area. Sighting and rumors of the big cat at the park brought Burrard-Lucas to the Laikipia Wilderness Camp in the first place, he wrote.

"Everyone had a story," said Nicholas Pilfold, a scientist who was part of the San Diego Zoo team. "It really became this myth that built up over time. It's been something rare and elusive and very hard to get."

Now that the scientists have the images, they can begin studying why exactly this genetic mutation occurs in the savanna, as most black leopards are found in tropical southeast Asia, where their dark coats help them sneakily hunt prey.

Capturing those pictures was quite the feat, Burrard-Lucas said, and he was frustrated that many outlets missed the point and distorted the story.

"All they're seeing is a headline and a tweet," he said. "They have a valid point, but my blog post is clear. People who now understand how it got used are understanding."

To underscore his point, Burrard-Lucas added an addendum to the blog post that started it all: "For clarification, I am not claiming that these are the first photos of a black leopard taken in Africa. I do however believe that they are the first high-quality camera trap photographs."

At least one of the offending news outlets made a change, too, softening the iffy historical claims: "Rare black leopard captured in new images from Kenya," CNN revised.