The #TriangleDance Is Taking Over Social Media And Everyone's Trying It

To do the triangle dance, three people arrange themselves in a triangle with linked arms and jump in between each other. 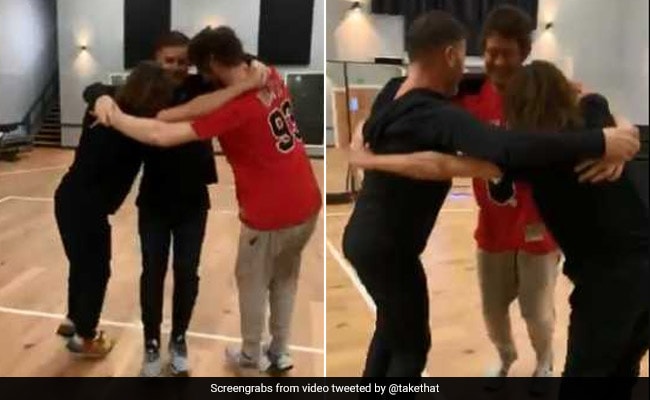 The triangle dance challenge is sweeping over social media

Move over, flossing. The Internet has a new dance to obsess over, and it's called the triangle dance. The deceptively simple-looking dance is sweeping over social media, and everyone seems to be trying it out. To do the triangle dance, three people arrange themselves in a triangle with linked arms and jump in between each other. Sounds simple enough? While some seem to have mastered the technique, others are failing hilariously, but still having fun.

The triangle dance challenge originated on the Tik Tok app in February, and spread rapidly from there. Right now, people are sharing videos of their attempts at mastering the dance with the hashtag #TriangleDance - and they are going viral on social media.

Take a look at some of the #TriangleDance videos below:

TRIANGLE DANCE. Combining teamwork, cardio, and crossing the midline, and incredible FUN! This dance has it all! Makes an awesome instant activity ! #physed#triangledancepic.twitter.com/JMygGlECrf

Others tried their hands (legs?) at it, but failed

When you are on point with your triangle dance! 👌 #TriangleDance#betterthanus#foundationstage#earlyyears#100percenteffort@LakesideYorkpic.twitter.com/M2yyfx4OPx

I can't stop laughing at this! #triangledance#twatspic.twitter.com/HxVwcZPZJv

And some used the #TriangleDance hashtag to crack jokes

This is me doing the #triangledance

I don't have any friends pic.twitter.com/wrQ0si2hJE

I can't do the #TRIANGLEDANCE , dont have two other friends irl. pic.twitter.com/b3kW4ISzHT

Have you tried the triangle dance yet? Let us know using the comments section below.