The photo is from the 1958 Algerian War 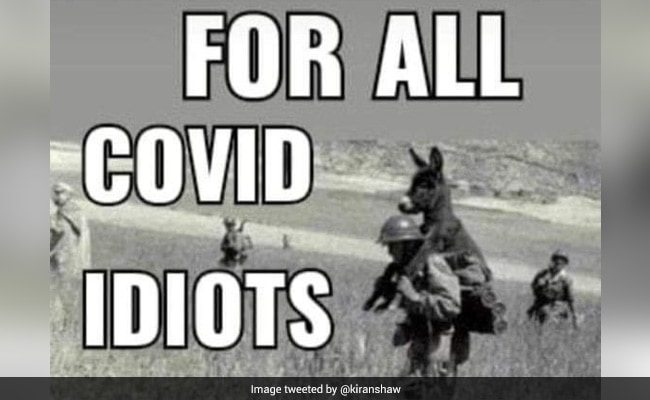 A viral pic shows a soldier carrying a donkey on his back.

There have been many memes used to describe those not following safety guidelines amid the COVID-19 pandemic. Despite a wide range of memes to pick from, there is one photo that the Internet keeps bringing up time and again. The meme in question purportedly features a soldier carrying a donkey on his back through a minefield, lest it should step on a mine. The donkey is used as a metaphor for those who choose to ignore warnings during a time of crisis. The latest personality to share this meme is the chairperson of Biocon Kiran Mazumdar-Shaw.

The picture is widely claimed to have been taken during World War II. But digging a little deeper revealed that is not the case. According to a report on the fact-checking website Snopes, the photo has nothing to do with the World War, or donkeys stepping on mines, or even minefields for that matter.

The report stated that the photo is, in fact, from the 1958 Algerian War and it shows a donkey who was rescued by one of the members of the French Foreign Legion. The soldier carried the animal to their base and provided it with necessary medical aid. The donkey was later named "Bambi" and they adopted it as a unit mascot.

Snopes also quoted author Douglas Porch, who in his book 1991 history of the Legion, said that the Legion adopted numerous mascots from monkeys, sand foxes to storks, keep following the military units. "In certain [units], the number of animals is greater than the strength in manpower. Especially gratifying was the knowledge that Bambi at the present time is enjoying an enviable destiny and that he is sharing the life of our legionnaires and even ... their beer," Porch wrote.

This was seconded by another website, Fake History Hunter. The report added that the photo was carried in important publications such as Paris Match, Daily Mail and the Daily Mirror at the time.

Decades later, the photo has found its way into popular consciousness in the form of a meme. It was even shared by New Jersey Governor Phil Murphy during a coronavirus briefing on April 6, 2020.