The Internet is Somewhat Obsessed With Shirtless Justin Trudeau Pics 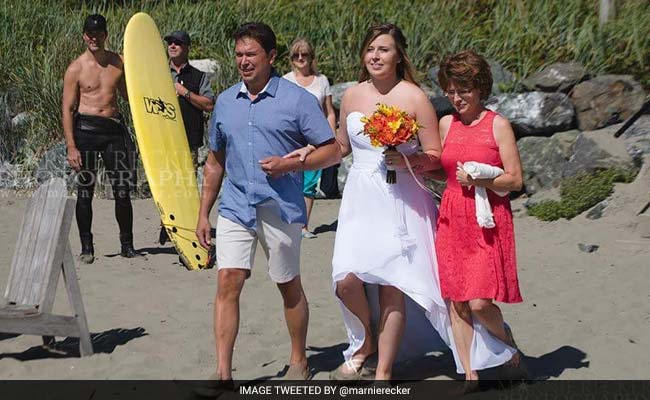 TORONTO: Sightings of a shirtless Justin Trudeau are causing something of a stir across Canada and internationally this summer.

The prime minister was most recently photographed shirtless while taking a break from surfing and simultaneously photobombing a couple getting married on a Tofino, British Columbia, beach.

A Vancouver Island wedding photographer, Marnie Recker, tweeted the photo of Trudeau on Saturday with his surf board standing several meters (feet) away from the bride, generating plenty of retweets and fanfare online.

#Trudeau moves out of the way for a bride coming onto the beach to be married. #tofino#cdnpoli#surf#weddingpic.twitter.com/0oWus4Qsmi

It wasn't clear exactly when the photo was taken, but Trudeau has been in British Columbia for the past week.

The 44-year-old Trudeau took office in November and carries one of the most famous names in Canadian political history. His late father was prime minister for the better part of 16 years, between 1968 and 1984, and remains the rare Canadian politician who is recognized in America.

The BBC and Time magazine reported on a Canadian family that encountered Trudeau while hiking in Quebec's Gatineau Park last month and took a selfie with the prime minister who was not wearing a shirt.

The satirical news website the Syrup Trap poked fun at the online obsession over the prime minister's physique with a story headlined: "Family on camping trip doesn't know how to tell shirtless Justin Trudeau to leave them alone."