The Internet Is Confused By This Pic Of A Girl 'Stuck' In Sidewalk. Can You Figure It Out?

The pic shows a girl seemingly submerged in grey concrete 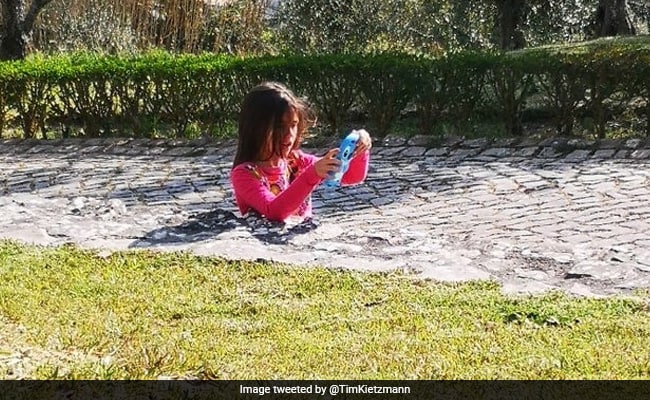 A viral pic shows a girl seemingly sunk waist-deep inside a grey sidewalk.

A picture of a girl seemingly submerged in a sidewalk has left social media users perplexed. Shared on Reddit almost two weeks ago, the picture began to gain viral attention after it was re-posted on Twitter recently. "No photoshop involved," declared Twitter user Tim Kietzmann while sharing the pic.

The photo shows a girl, dressed in pink, playing outdoors. While that in itself sounds innocuous enough, what is making people do a double take at the photograph is the camera angle and positioning that makes it look like the girl is submerged waist-deep in grey concrete.

The pic, which seems to defy the rules of science and common sense, has left viewers on social media baffled. When it was first shared on Reddit, the caption read: "My daughter, where's the rest of her?!" It was followed by "Ohh I see, do you?" - challenging the viewers to figure out the answer to the puzzle.

Since being posted on Twitter, the pic has racked up over 8,000 'likes' and hundreds of baffled comments. While some said they figured out the mystery of the submerged girl upon closer inspection, others remained confused.

"This is making my brain hurt...I just can't see it," wrote one Twitter user. "It took me a while but I saw it," said another.

Eventually, people managed to figure out the optical illusion. The girl is actually standing behind a short wall that is the same colour as the sidewalk. That makes it appear as if she has sunk into the sidewalk.

Got it 😏
Basically, the foreground is higher than where the girl is standing. Makes sense, but it's very tricky.

She's standing next to a wall. Took me 10 seconds without having to examine it. Use logic, not your eyes.

How long did it take you to see the truth?