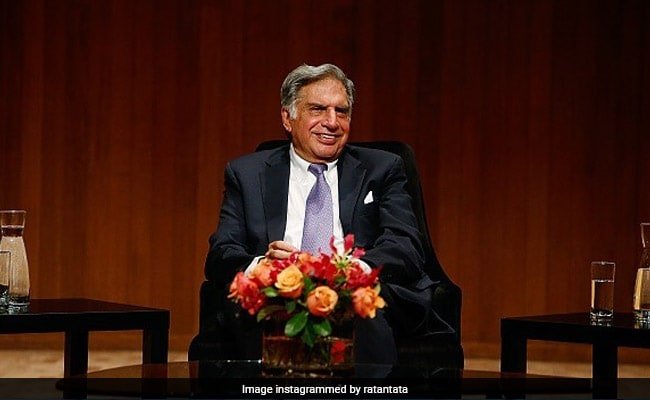 Ratan Tata has revealed in an Instagram story what he looks forward to every day in office - meeting his "friend" Goa. This morning, the Tata Group Chairman Emeritus, whose love for dogs is no secret, took to Instagram to share a picture with Goa, one of the dogs that lives in Bombay House, the global headquarters of Tata Group.

In 2018, Tata Group had reopened Bombay House with a special kennel dedicated to stray dogs living around the area.

Mr Tata shared a picture with one such Bombay House dog and wrote: "What I look forward to every day at office. My friend Goa." An image Instagrammed by Ratan Tata.

According to The Economic Times, Goa is the leader-of-the-pack at Bombay House. The black and white dog travelled from Goa to Mumbai as a puppy, earning him his unusual name, and he is rumoured to be Mr Tata's favourite.

"He would wait for Mr Tata to arrive each morning at Bombay House and ride up the elevator with him. Goa had even earmarked a couch to sleep on in the office," a long-time occupant of Bombay House said to The Economic Times

According to an Instagram post by Pet Traits, one week ago, Mr Tata had even visited an exhibition on paintings of the Dogs of Bombay House by Meghna Amonkar and signed a portrait of Goa.

I can't believe it!!! Mr. Tata decided to visit Starbucks himself to see my paintings of the Dogs of Bombay House!!! He even signed my portrait of Goa. I am so so honoured. I don't have the words! ????My paintings have been hosted by Starbucks fort since the 19th and I can't thank them enough. Mr. Navin Gurnaney the CEO of Starbucks India was also present and is also a pet parent, as I discovered today. #ratantata #tatatrusts #dogsofbombayhouse #starbucksindia #starbucks #indiedogs #indiedogsofinstagram #desidogs #desidogsofinstagram #adoptdontshop

Mr Tata's fondness for dogs is well known. He had earlier shared an adoption appeal for an abandoned dog.