Yen Wei-shun, 40, works alongside his mother to make free bowls of noodles for customers who cannot afford a meal For most of his life Yen Wei-shun was on the wrong side of the law, but the former Taiwan gangster says he is making up for lost time by churning out noodles for the needy.

His family has run a noodle stall, tucked away in a bustling traditional market in New Taipei City, for decades.

Now Yen, 40, is working alongside his mother to make free bowls of noodles for customers who cannot afford a meal.

Yen's venture has caught the attention of local media and a video of his life, made by a Shanghai-based online outlet, has been viewed hundreds of thousands of times on YouTube. 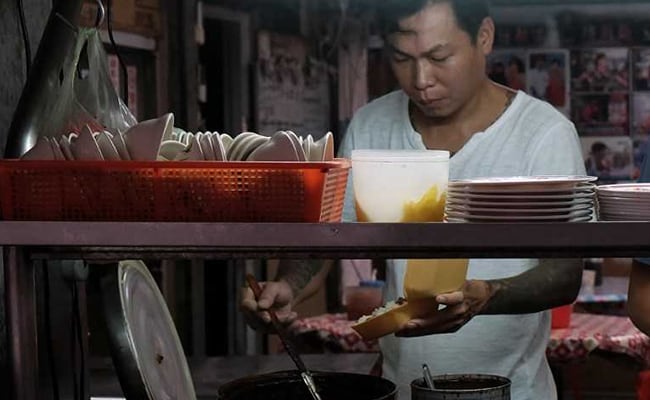 His gangster life started young -- at 15 he was convicted of manslaughter after fatally wounding a man in a group fight and jailed for four-and-a-half years, he says.

But after his release, Yen continued his involvement and found himself in court again eight years ago on illegal gun possession charges.

He got away with a suspended sentence, something he considered a "second chance at life from heaven".

"This case was like a wake-up call for me. I have come to realise I must cherish what I have from now on -- my family and freedom," he told AFP.

His family's cooking cart is loaded with steaming pots of broth and noodles.

Bowls of noodles with pork, shrimp and cabbage sell for Tw$80 ($2.60) to regular customers.

But they can also give an extra Tw$75 to pay for a bowl for someone who cannot afford it.

Yen says he gives away 600-700 free bowls a month, mostly paid for by donors, making up any shortfall himself.

He has served 40,000 bowls of free noodles since he started the initiative over four years ago and offers delivery services to residents with physical disabilities.

He does other charity work and has also visited prisons to talk about his experiences.

One of the regulars at the noodle stall is a 62-year-old ex-gangster estranged from his family, who Yen says serves as a constant reminder not to go down the old path.

"I see many old gangsters who end up like him. I feel very sad and realise how much time I've wasted already," Yen said.

Support from his family and appreciation from people Yen has helped are keeping him on the right course, he added.

"In my old gang days I felt like I was always walking a tightrope because I could meet enemy gangsters anytime. But now I meet people who are happy to see me."