This Pikachu meme is so relatable 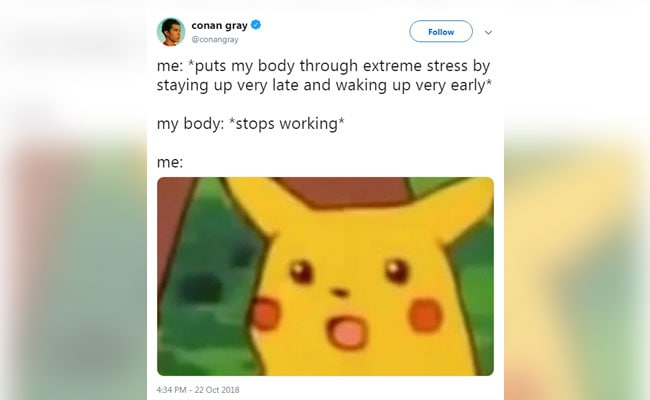 The surprised Pikachu meme has taken over social media.

As every '90s kid will confirm, Pikachu is an icon in itself. The electric type Pokemon - who first appeared in Japan in 1996 as part of the original Pokemon game, and then achieved worldwide fame through the popular 1997 Pokemon anime series - has now entered the age of Internet memes. The latest meme to take over Twitter is known as 'Surprised Pikachu', and it is as funny as it sounds.

The meme uses a screenshot of - you guessed it - a surprised-looking Pikachu from season one of the original anime series, according to Know Your Meme. The premise of the meme is quite simple - a person does something that is sure to have an obvious outcome, and then expresses astonishment at the outcome.

According to Daily Dot, the meme first appeared on Tumblr in September, and then grew in popularity

We collected some of our favourite surprised Pikachu memes for you to laugh at. Take a look:

me: *puts my body through extreme stress by staying up very late and waking up very early*

Me: five more minutes
Me: hits snooze
Me: wakes up 50 minutes later
Me: pic.twitter.com/MfKaeQHVLj

phone: battery 2% connect to a power outlet to avoid shutdown
me: keeps using without charging it
phone: shutting down
me: pic.twitter.com/hJ26er9C9C

#DetectivePikachu is putting surprised pikachu out of a meme job pic.twitter.com/EUzhGqbqSV

when you realize the surprised Pikachu meme was all a marketing ploy for Detective Pikachu pic.twitter.com/v1pNCBLVvJ

Which meme did you find most relatable? Let us know using the comments section below.

Watch: 90-Year-Old Goes Bowling For The First Time With Granddaughter