"I was shocked and amazed," said the Florida man. 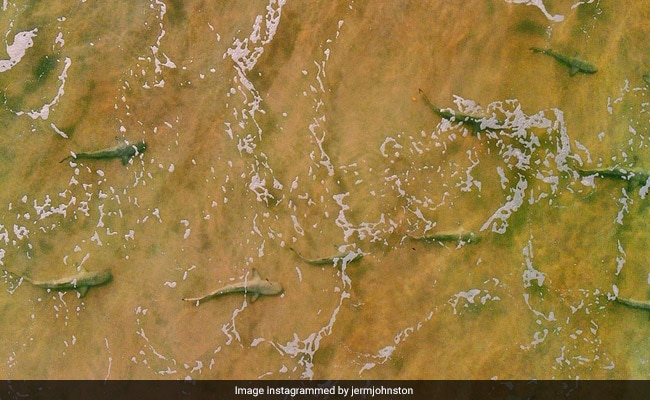 A pic by Jeremy Johnston shows sharks in the shallow waters of New Smyrna Beach.

A Florida surfer did not realise just how dangerously close he was swimming to sharks until he saw drone footage taken from above the beach. The video, shared by surfer Jeremy Johnston on Instagram, shows about a dozen sharks swimming in shallow water at New Smyrna Beach in Florida, US.

Mr Johnston, 33, told CNN that he was already wary of going into water on Tuesday because he saw fishermen in the area.

"But the weather and waves were really great so I decided to go for it," he said. "I ran out and jumped on my board when I got to shin-deep water and paddled super [shallow] with just my hands, because I was scared of how many sharks were there."

After surfing for a bit and then getting out of water to launch his drone, Mr Johnston was stunned to see the shallow waters filled with dozens of sharks. "Yesterday I stood on the beach for 20 minutes scared to paddle out solo, then only surfed for 10 minutes... This was shot today and these locals are swimming in ankle deep water," he wrote while sharing the video on Instagram.

The last couple days have been interesting at @nsbinlet, yesterday I stood on the beach for 20 minutes scared to paddle out solo, then only surfed for 10 minutes... This was shot today and these locals are swimming in ankle deep water... And now you can see why I've been so spooked paddling out alone! Happy Tuesday | #nsbinlet ???????????????????????????? @nsbinlet

The video has collected a number of horrified comments, along with nearly 23,000 views.

The sharks were later identified as blacktip sharks that are very common at New Smyrna Beach. In fact, experts call the area the shark attack capitol of the world and according to National Geographic, it is estimated that anyone who has swum there has been within 10 feet of a shark.

"I was shocked and amazed," said Mr Johnston to CNN. "I've only ever seen footage like that on 'Shark Week' and I've always dreamed of getting a clip like this, especially since we're the shark bite capital of the world."