The picture of Jaya Prada and the late Sridevi was taken on the sets of the 1984 film Tohfa. 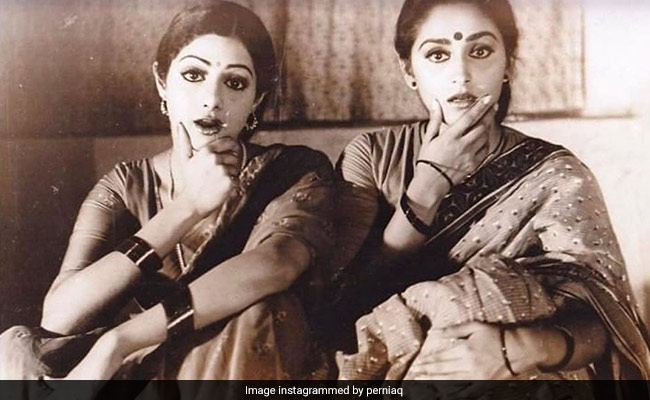 Pernia Qureshi shared a throwback pic of Jaya Prada with the late Sridevi.

As the Maharashtra government on Sunday announced new restrictions -- including a "strict lockdown" over the weekends -- amid a surge in coronavirus cases, celebrity stylist and entrepreneur Pernia Qureshi found a picture that sums up the mood of the people. Pernia delighted Bollywood fans when she shared an old black and white picture of the late Sridevi with veteran actress and politician Jaya Prada. "The reality of lock down in Maharashtra setting in like..." she wrote while sharing the pic, which shows Sridevi and Jaya Prada both wearing expressions of surprise.

In the throwback picture, the two actresses, who were professional rivals in the '80s, were seen with their mouths open and hands on their chins, as if left astonished by something.

The picture has garnered hundreds of 'likes' since being posted a few minutes ago. In the comments section, some Instagram users dropped heart-eye emojis.

The picture of Jaya Prada and the late Sridevi was taken on the sets of the 1984 film Tohfa. While the two actresses shared screen space in a number of films, they were famous for their professional rivalry. "We were sisters on screen but off camera we used to sit in different corners on the set. We never used to look each other in the eye," Jaya said recently on The Kapil Sharma Show, according to News18.

Maharashtra's new Covid rules include a night curfew in the state from 8 pm to 7 am and a ban on gatherings of five or more throughout the day.

WhatsApp Tricks And Shortcuts You (Probably) Don't Know About