Stranded In Mumbai Rain, French Family Thanks Gurudwara For Help 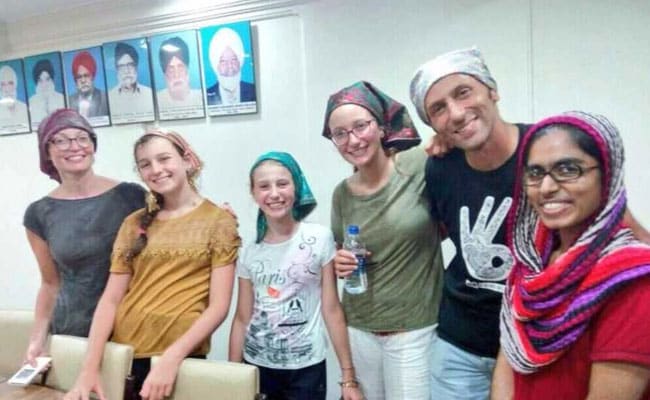 Mumbai rain: Arie and Sophie Boleslawski with their daughters at Dadar Gurudwara

With every tragedy come incredible stories of humanity and generosity. As Mumbai struggles to deal with the mayhem caused by the heavy downpour on Tuesday, the kind-heartedness of its residents has been an example for everyone. While officials worked day and night to reach out to stranded people, good Samaritans and local businesses came out in full strength to do their bit as they offered food and water to stranded Mumbaikars. Some even opened their doors to strangers.

Among them, the Shri Guru Singh Sabha Gurudwara in Dadar. After heavy rain flooded the city, many people took refuge in the Gurudwara. The Gurudwara offered not only 'langar' but also provided shelter to about 750 people in its multiple prayer halls. Among the several people who took shelter was the Boleslawski family from Paris, France. The family of five that was travelling from Udaipur, Rajasthan to Aurangabad, Maharashtra found themselves stranded in Mumbai after their train to Aurangabad was cancelled. Unable to find a hotel to stay in, the family was told to go to the nearest Gurudwara.

"The husband and wife came with their three daughters. They said the people at hotels and restaurants told them to come to us. Two local boys brought the family to us. We provided them bedding and food," Kulwant Singh, Vice-President of the Gurudwara committee told NDTV.

The family left for Aurangabad this morning but not before leaving a heartwarming thank you note for the Gurudwara's volunteers, along with a donation.

The note read: "Dear friends, we were lost in the rain and your gurudwara (sic) appeared like lighthouse in the dark. Not only you provided us with a shelter but you welcomed (sic) us with extreme kindness. One of our worst experience in India turned to one of the best and we learned a lot from you." 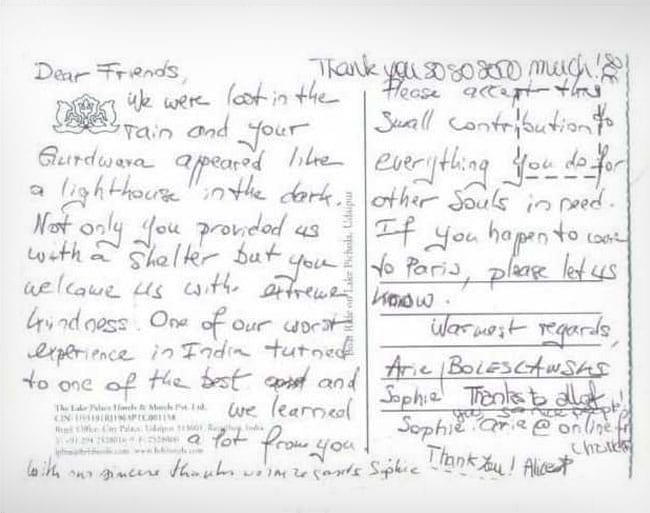 Shared on Twitter by Harjinder Kukreja, reactions poured in to the heartwarming note:

Pls convey my hearty admiration and gratitude to gurudwara in charge for this gesture. U make India proud

With everything awful happening in India, this is one amazing news story which everyone needs to read!!

This is India.we know how to do miracles with love.

Thank you Sikh brothers for saving our pride in front of foreigners...u guys r such a blessing to this nation

Several communities have come together to the aid of Mumbaikars who have been stranded on the roads, train stations far from the safety of their homes. Social media is full of numerous examples of the kindness of the residents.

There have been five rain-related deaths in the city which saw 30 times the average amount of rain on Tuesday.

NDTV has reached out to the Boleslawski family.Click for more trending news