Stomach-Churning Video Shows Snake Trying To Eat Its Own Tail

"Rough markings on his scales indicate past damage from digestive enzymes, suggesting that he had swallowed himself in previous years, so it's probably a bad habit of his." 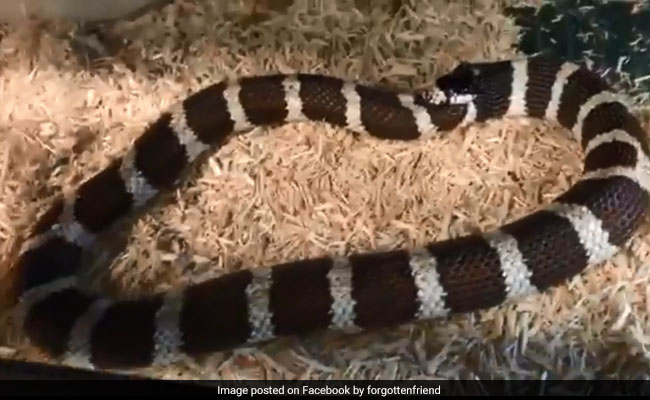 A viral video shows a kingsnake trying to eat its own tail.

Squeamish? Easily disgusted? Dislike snakes? If you tick any of those boxes, this video is not for you. A reptile sanctuary recently had to save a snake from itself after it was found trying to swallow its own tail. A video of the incident has gone viral online after it was shared on Facebook.

In the video, Jesse Rothacker, a snake expert at the Forgotten Friend Reptile Sanctuary in Pennsylvania, is seen trying to free the kingsnake from its own jaws. He told WKRG News 5 that the rescue staff was getting ready for an outreach program on Friday when they noticed the kingsnake trying to eat its own tail.

"This is the first time in the sanctuary's 15-year history that one of the kingsnakes was caught trying to swallow itself whole," Mr Rothacker said.

In the video, Mr Rothacker manages to save the snake from eating itself, but not before meeting some resistance. Take a look at the video below:

Since being shared online, the video has collected over 50,000 views and dozens of comments.

"So full of himself," quipped one person in the comments section. "That's crazy," said another.

According to Mr Rothacker, kingsnakes are known for eating other snakes and are even immune to rattlesnake and copperhead venom.

According to Newsweek, Mr Mr Rothacker also countered suggestions that the snake, named Kronos, was eating itself because it was hungry or stressed. ""We want to point out this snake showed no signs of stress, had plenty of access to food and water and burrowing material and a hiding cave and appropriate temps, just like all our snakes," he said.

"Rough markings on his scales indicate past damage from digestive enzymes, suggesting that he had swallowed himself in previous years, so it's probably a bad habit of his. Sometimes animals do silly things, like dogs chasing their own tails, or in rarer cases, snakes swallowing their own tails."