In a scene straight out of a Bollywood potboiler, a bride's ex gatecrashed her wedding just as sheand groom were about to exchange garlands in Uttar Pradesh. 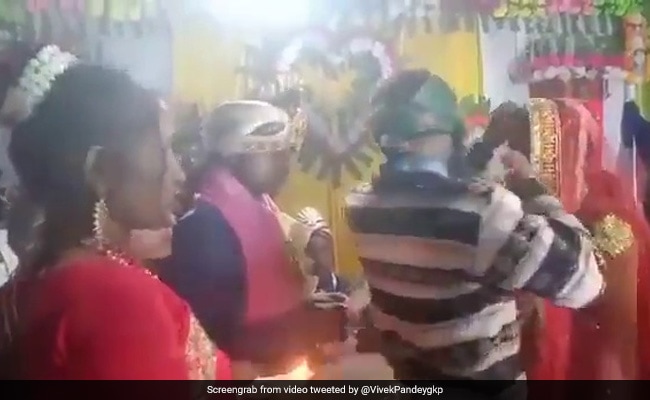 In a scene straight out of a Bollywood potboiler, a bride's ex gatecrashed her wedding just as she and groom were about to exchange garlands in Uttar Pradesh. Shocking footage that has been widely shared online shows the man taking out a packet of sindoor and smearing it on the bride's forehead, even as the groom looked on. Everything happened so quickly nobody present at the spot even had the slightest opportunity to react.

Soon the relatives realised what was going on and they lunged to stop the lover. But the man was successful in escaping. The bizarre incident took place in Gorakhpur, Uttar Pradesh, India Today reported. The entire incident was captured on camera.

The video showed both the bride and groom on the stage, surrounded by their relatives, for the varmala ceremony. The bride touches the groom's feet and the groom then takes a garland to put around her neck. Suddenly, the man, who had his face covered with a scarf, walked between them and applied sindoor on the bride's forehead. For a few seconds, everyone is stunned into silence and then some people gather themselves and run after the man. He, however, appeared to have escaped. According to the India Today report, the wedding was completed the next morning after the girl's ex-lover was sent back home after much persuading.

In UP's Gorakhpur, a spurned youth gatecrashed an ongoing wedding and applied vermilion to the to-be bride. Families and relatives tried to overpower him resulting in a major ruckus at the venue.@SaumyaShandily3@anantmsr@vandanaMishraP2pic.twitter.com/nZPKHl7VVi

A report in The Tribune said the girl's wedding was arranged when the spurned lover had gone out of the town for some work. When he came to know about it, he decided to profess his love in front of everyone.

Sara Tendulkar Made Her Modelling Debut For This International Clothing Brand