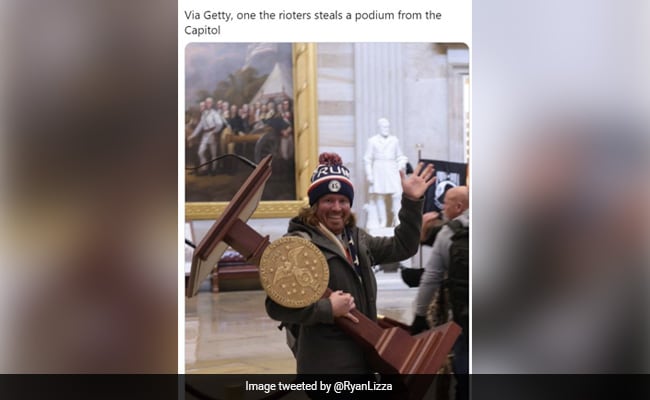 Here's why some people think the podium-stealing protester at Capitol is named Via Getty.

Several shocking images of protests and rioting on Capitol Hill by supporters of Donald Trump have emerged on social media. The Capitol building in Washington came under siege from Trump supporters on Wednesday as they bypassed security and stormed inside. Photographs that have emerged from the chaos show rioters looting the building, vandalizing offices and flipping tables.

One such image appears to show a man stealing a podium and walking away with it, waving cheerfully for the camera.

The photograph was posted on Twitter by journalist and political analyst Ryan Lizza, who captioned it: "Via Getty, one the rioters steals a podium from the Capitol."

Via Getty, one the rioters steals a podium from the Capitol pic.twitter.com/V4spojl40q

While his caption was meant to signify that he had obtained the photograph through Getty Images, some people took it to mean that the protester's name was "Via Getty".

Well we've seen his face and according to this tweet he's called Via Getty, so making an arrest should be simple https://t.co/iq8hYhnpbu

In no time at all, calls to arrest "Via Getty" and other rioters grew on social media, with several confused people continuing to think it was the podium-stealing rioter's name despite Ryan Lizza posting a clarification.

"To be clear, "via Getty" is not a person. It just means that this photo comes via Getty Images," he wrote in order to clarify that Getty is the name of a photo service, not a person. But by then, calls to arrest Mr Getty had grown louder - and jokes had already started rolling in.

Via Getty isn't acting alone. He's with Via Reuters and none of you are saying anything about it

“We have identified Mr. StockImages. What kind of name is that?”

Protesters triggered unprecedented chaos and violence in the Capitol on Wednesday when they swarmed inside the building amid a session of Congress to certify Joe Biden's election win. Four people died in the violence.