Solid Gold Toilet, Set With Over 40,000 Diamonds, Captivates The Internet 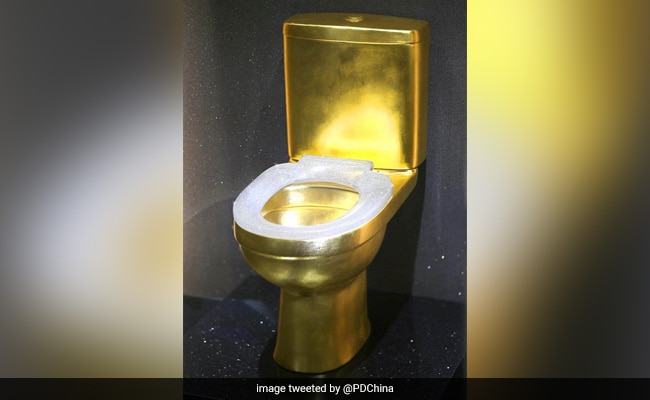 This toilet has been studded with 40,815 diamonds.

A diamond-encrusted toilet, crafted out of solid gold, has taken social media by storm. The swanky toilet was unveiled at the second China International Import Expo (CIIE) in Shanghai on Monday. Made by Hong Kong-based jewellery brand Coronet, it comes with a bullet-proof seat and may even set a record for the most number of diamonds in a toilet seat.

According to Daily Mail, the seat of the glamorous toilet is made of bullet-proof glass and embedded with 40,815 diamonds. Together, the diamonds weigh a whopping 334.68 carats.

A toilet studded with 40,815 diamonds worth over $1,200,000 is exhibited at the 2nd #CIIE in Shanghai. A guitar made of a 400-carat diamond and 18K white gold is also on display, with an estimated value of about $2 million. pic.twitter.com/uPYt6tSHMs

A gold toilet decorated with 40,815 pieces of 334.68-carat diamond on its bullet-proof glass lid is on display at the 2nd China International Import Expo in Shangha. The toilet is expected to set a Guinness World Record on the afternoon of Nov. 6, local media reported. pic.twitter.com/Kh9kqRumar

It is estimated that this gold toilet could fetch as much as $1.3 million - or approximately Rs 9 crore. However, Aaron Shum, the founder of the brand Coronet, declined to reveal if the lavish toilet had attracted any potential buyers. He also said he was not willing to sell it.

"We would like to build a diamond art museum so that more people can enjoy it," Mr Shum told Daily Mail.

The gold and diamond toilet has created waves on social media. While some have praised it, others have criticised it as ostentatious. "Looks cool," wrote one person on Twitter. Another, however, labelled it "ridiculous".