Sascha Fonseca, a wildlife photographer, managed to capture a shot of one of the most elusive animals - the snow leopard - and that is now going viral 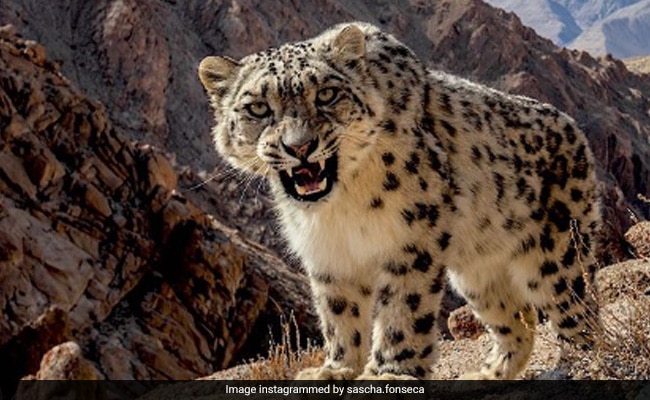 The snow leopard uses its white and grey coat as a natural camouflage to fit into its snowy environment.

Wildlife photographers take a lot of pain to capture rare and stunning shots. They have to spend days - sometimes weeks - in deep forests or barren lands to get the perfect pose of an animal.

Sascha Fonseca, a wildlife photographer, managed to capture one such shot of one of the most elusive animals - the snow leopard - and that is now going viral. It shows the big cat growling at the camera.

Mr Fonseca shared the amazing shot on his Instagram account, which he took in the mountains of Ladakh.

The snow leopard uses its white and grey coat as a natural camouflage to fit into its snowy environment. It is sometimes referred to as the ghost of the mountains.

Capturing this elusive animal's shot in the wild is a challenge but Fonseca managed to capture his images with the use of a motion-triggered DSLR camera trap.

"A Snow leopard youngster interacts with my camera trap in the mountains of Ladakh. He is probably reacting to the shutter sound of the DSLR," he said in the caption.

"Unbelievable," a user wrote while other said, "Your work is amazing, a dream."

According to his Instagram bio, Fonseca is on a mission to inspire wildlife conservation and is currently working on a project Amur Tiger, in Far East Russia.

In March, this year a footage of a fully grown snow leopard went viral when it was sighted at an altitude of 12,500 feet near Kaza in the Spiti Valley of Himachal Pradesh.

The animal was captured on camera by soldiers of the Indo-Tibetan Border Police (ITBP) and shared by the news agency ANI on Twitter.

In India, snow leopards are mostly found in the high-altitude, mountainous terrains of Jammu and Kashmir, Himachal Pradesh, Uttarakhand, Sikkim, and Arunachal Pradesh.