Sneezing In Space, Aliens, GoT: NASA Astronaut's AMA Is Out Of This World

American astronaut Scott Kelly, who returned to Earth after spending 340 consecutive days in space last year, hosted a Reddit "Ask Me Anything" and answered the Internet's most burning questions. 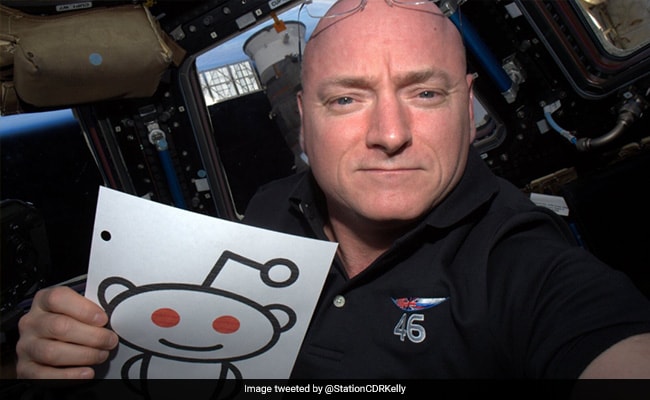 NASA astronaut Scott Kelly hosted a Reddit "Ask Me Anything" (AMA) on Monday, answering questions on everything from what space smells like (burning metal, apparently) to aliens and Game of Thrones (the astronaut binge-watched the TV series twice up in space). We compiled a list of 15 of the most interesting questions-and-answers. The astronaut spent nearly an entire year living aboard the International Space Station (ISS) and holds the record for the longest consecutive amount of time spent in space by an American astronaut.

Theocletian: What do you think is the biggest misconception that people have about astronauts?
Scott Kelly: That they were always the smartest kid in the class, and I was not.

IntlTasteStation: How long does it take to get used to looking at Earth and realizing you're not on it? What does it feel like looking at Earth?
Scott Kelly: Instantly. You just had the ride of your life, and you know you are not on Earth anymore.
It's inspiring.

edscouse: What does the ISS smell like? Are there ever any issues regarding smells? And if so, how do you go about solving them?
Scott Kelly: We store our garbage on board for a long period of time, so sometimes it can get smelly. In general, though, it's not an unpleasant smell on board. Space itself has a very unique smell, kind of like burning metal.

ripoffcandydate: How do you know how space smells like?
Scott Kelly: When a volume was previously at vacuum, like after a space walk or a resupply ship arriving, when you open the hatch you can smell it.

trpov: Did you socialise much with the Russians on the station? Does it feel like one team or more like two separate teams in different parts of the ISS?
Scott Kelly: Yes, all the time. They are great friends. But sometimes it seems like we're working on two different space stations, because there are two halves.

IntlTasteStation: What beverage options does one have on hand on the ISS? Did you miss any foods/snacks?
Scott Kelly: We have a lot of juices and coffee and tea. And something that's similar to Kool-Aid.
Do I miss any food/snacks? From space? No.

gshirodkar: What was your first meal upon returning back to earth?
Scott Kelly: A salad.

Sheepy12321: What is the scariest experience that you had in space or in the atmosphere?
Scott Kelly: That's a tough question. The worst time was when my sister-in-law (US Representative Gabrielle Giffords) was shot, and I was halfway through a six-month flight.

Overlord_Odin: There's been more talk recently about the US returning to the Moon. What are your thoughts on this? Should we be keeping our sights on Mars? Or do you think the Moon would be a useful stepping stone?
Scott Kelly: In a perfect world, the Moon is a great place to learn and practice for going to Mars. But with limited funding, maybe directly to Mars is a better choice.

a0mars02: I'm an engineer at SpaceX. Would you ever consider making the one way trip to Mars?
Scott Kelly: Absolutely not. I would need the return ticket. Would you?

nanniej: How has your space experience changed your outlook/beliefs in life?
Scott Kelly: Having a good understanding of the size of the universe, I find it hard to believe there's not life out there. Having said that, I don't think the aliens stopped visiting Earth once everyone got a camera in their pocket.

PrestigeMaster: Did you feel "smarter" once you got back on earth? The same way pilots say flying opens their mind a bit.
Scott Kelly: You definitely have a different perspective when you've spent time in space, and some people refer to this as the orbital perspective: a sense of being more empathetic to the environment and the human condition.

FyonFyon: What happens when/after you have to sneeze inside the space station?
Scott Kelly: Well if you don't cover your sneeze-hole, something's going to travel for miles and miles and miles.

Promoted
Listen to the latest songs, only on JioSaavn.com
hehyih: What did you miss the most about gravity while in orbit?
Scott Kelly: The fact that it holds everything down.

MissRhino: Are you a fan of Game of Thrones and if so, were you able to keep up while in space?
Scott Kelly: I wasn't until I got to space and binge watched the whole series twice.Click for more trending news