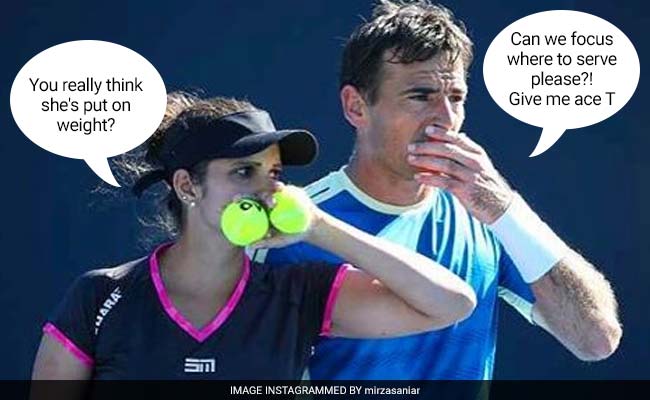 Sania Mirza and Ivan Dodig during their match.

Indian tennis' golden girl Sania Mirza and her mixed doubles partner, Croatia's Ivan Dodig, are well into the quarter finals of the ongoing Australian Open after defeating Austria's Peya Alexander and China's Zheng Saisai moments ago. It's obvious the tennis champs are playing superbly but have you ever wondered what their on-court conversations are like? Allow Sania to tell you. Turns out it's not always about the game, apparently. In an Instagram post, shared some eight hours before writing this, Sania revealed a hilarious exchange she had with Ivan, most likely during their first round match against Germany's Laura Siegemund and Croatia's Mate Pavic on January 21.

The post, hashtagged 'mixed troubles conversations,' shows a picture of the two partners deep in conversation. One would think they were discussing their next moves and tactics but Sania seemed to have something other than the game on her mind too.

Along with the photo, Sania shared their exact conversation at the moment. And it had something to do with someone's weight. Take a look:

Me- you really think she's put on weight?' Ivan-'can we focus where to serve please?! Give me ace T' Me- sure.. one Ace T coming up.but seriously has she? I think it's the dress' #MixedTroublesConversations #DoMi #SM @ivan_dodig

Since being shared, the post has collected over 22,600 'likes' and many comments on Instagram. The little exchange shared by Sania seems to be making several people giggle.

Promoted
Listen to the latest songs, only on JioSaavn.com
"Wow nice way to ease the game tension Sania," says one commenter on the post. "I'm sure that really happened," says another.

Satya Nadella On The Life Lessons His Father, An IAS Officer, Taught Him