Sania Mirza To Shilpa Shetty: Celebs Look Back On Their TikTok Journeys In Latest Trend

Using the hashtag #DilBoleTikTok, celebrities are looking back at their journeys on TikTok. 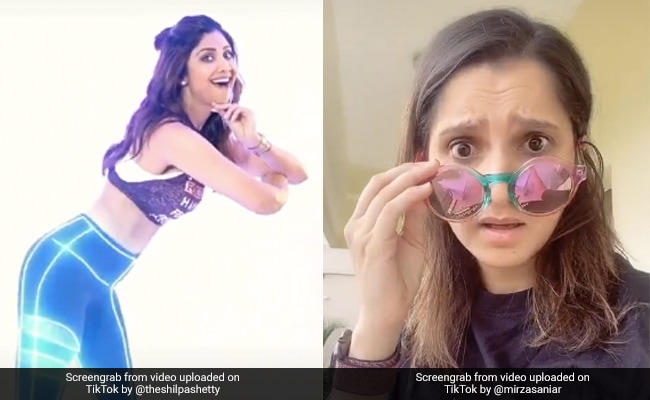 Celebrities look back at their journeys on TikTok with #DilBoleTikTok.

Since its launch in India in 2017, Chinese short-form video sharing app TikTok has exploded in popularity in the country. According to Sensor Tower, a mobile app store data analytics firm, TikTok was the most downloaded non-game app worldwide for January 2020 - with India accounting for a third of all downloads. Many celebrities have also made accounts on TikTok and amassed millions of fans there. Now, they are looking back at their journey on TikTok in the latest trend that is taking over the platform which is fueled by viral challenges and Internet trends.

Using the hashtag #DilBoleTikTok, users of the app are sharing video compilations of some of their most popular TikTok posts. Take a look at the TikTok journeys of your favourite celebrities below:

Actor Shilpa Shetty, 45, is one of the most active TikTok users with 18.8 million followers. On her birthday on June 8, the Dhadkan actor took to TikTok to share a video of her favorite TikTok memories. "Yaadon ke saath manaaya...Birthday ka dhamaal (Celebrated my birthday with memories)," she wrote while thanking her fans for the love she has received on TikTok.

Take a look at her video below, which has gone viral with a whopping 11 million views:

Tennis star Sania Mirza is another star who has often delighted her fans with hilarious TikTok videos. On Friday, the 33-year-old shared her own #DilBoleTikTok video - starting with the first clip she posted on March 30, 2020. Watch it below:

Celebrity chef Sanjeev Kapoor shared his first TikTok video on December 26, 2019. Mr Kapoor, whose recipe videos often receive millions of views on the app, shared a video compilation of his best videos. The video has gone viral with over 6 million views and hundreds of comments from fans. Fair warning: watching it might make you hungry.

My tiktok journey! Thank you for all the love! ##DilBoleTikTok##sanjeevkapoor

Actor Riteish Deshmukh has shared over a 100 videos on TikTok since he joined the platform in 2018. A popular star with more than 15 million TikTok followers, Mr Deshmukh was also among the first to participate in the #DilBoleTikTok trend. His video features wife Genelia and his two sons, who sometimes make appearances on his TikTok feed. Watch:

My Journey on TikTok. ##DilBoleTikTok

Cricketer Yuzvendra Chahal made his first TikTok video on December 30 last year. Since then, the 29-year-old has amassed a following of 5.2 million with his hilarious videos. Take a look at his TikTok journey below:

Have you participated in this trend yet? Let us know using the comments section.