Even though it was a sweet gesture by the commissioner to wish Rohit Sharma luck before the match, several internet users mistook the picture and thought he had been arrested. 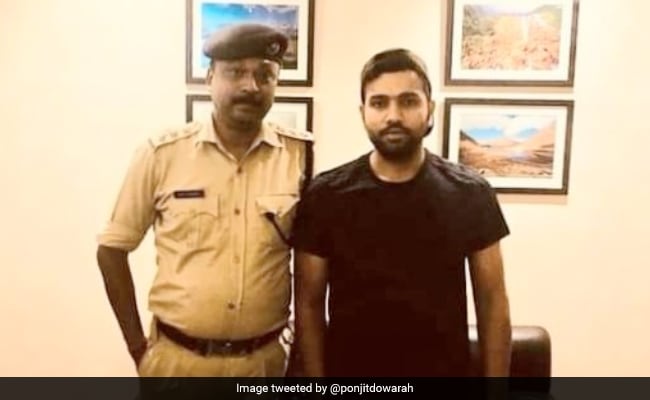 On Sunday, Guwahati hosted the second T20 International between India and South Africa at the Barsapara Cricket Stadium. In the match, India registered their first-ever series win against South Africa with a 16-run victory. However, even before the match began a picture of India's Captain Rohit Sharma standing side by side with Deputy Commissioner of Assam Police Ponjit Dowarah took the internet by storm.

Mr Dowarah shared the image on Twitter on Saturday. "Best of luck. Ek century banta hein (One century is a must). @ImRo45," he captioned the post.

Since being shared, the picture has garnered more than 11,000 likes and over 650 retweets.

Even though it was a sweet gesture by the commissioner to wish Rohit Sharma luck before the match, several internet users mistook the picture and thought the India cricket captain had been arrested right before the T20I on Sunday.

"At first I thought u are arresting him, no one is smiling in this pic Y?" wrote one user. "Look like he is arrested," said another.

A third jokingly commented, "Don't arrest my idol Deshrohit Besharama," while a fourth added, "Why so serious Rohit? Looks like you are arrested or an accused here."

Meanwhile, in the match, though it was the Indian team that emerged triumphant, South African batter David Miller won many hearts with his fighting century that brought the tourists close to the hosts' total. The quality of Miller's batting was such that even Rohit Sharma and Virat Kohli couldn't resist walking up to the South African player and acknowledging his effort.

Taking to Twitter, the Board of Control for Cricket in India (BCCI) shared a video featuring Miller where India's captain and Kohli were both seen talking to him after his gigantic effort.