"It's clear from the footage that after hiding glass in her clothes, this person then deliberately places it in her mouth." 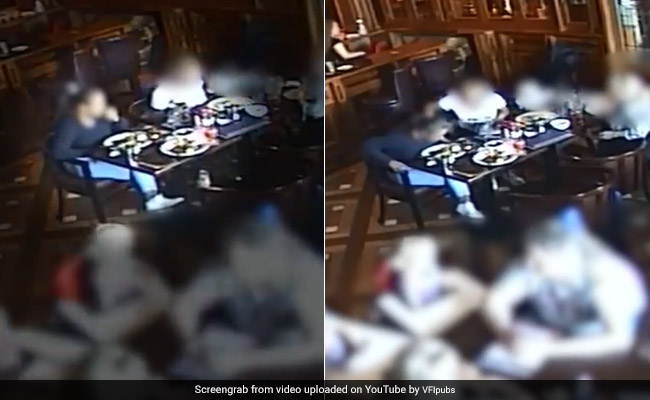 A restaurant diner put glass in her mouth and pretended to choke.

CCTV footage has captured the moment a woman appeared to place broken glass in her mouth, before pretending to choke at a restaurant. The incident happened recently the Judge Roy Beans bar and steak house in Newbridge, Ireland.

Footage from the incident shows the woman reaching into her top, pulling something out and placing it in her mouth. She then begins to choke, and her companion rushes to help her. According to Irish Mirror, the unnamed woman complained to staff that she had choked on broken glass pieces that were in her food.

Unfortunately for her, CCTV footage from the restaurant showed otherwise.

"It's clear from the footage that after hiding glass in her clothes, this person then deliberately places it in her mouth. She told a member of staff that the glass was in her food, which was obviously not the case," Vivian Carroll, owner of the restaurant, told Irish Mirror.

"We checked the CCTV footage and told her the entire incident had been recorded. The Gardai were called, they took her details and she left.

"But if it wasn't for security cameras I could possibly have faced a massive claim."

The footage was shared on YouTube by the Vintners' Federation of Ireland, where it has been viewed over 20,000 times. You can watch the whole thing unfold below:

According to the Mirror, Padraig Cirbben, chief executive of Vintner's Federation of Ireland, slammed the incident.

"The so-called 'compo culture' stems from the fact that people think they can get away with making outrageous insurance claims, a belief supported and encouraged by some within the legal sector and facilitated by insurers settling dubious claims," he said.

In March this year, a man in China was arrested for placing a dead rat in his food to blackmail a restaurant.