This morning, Ratan Tata shared a memory from the day "one of Jeh's many dreams" came true 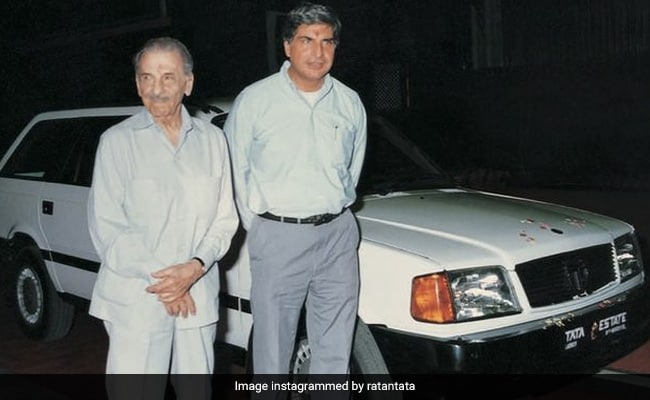 JRD Tata with Ratan Tata on the launch celebration of the Tata Estate car.

Ratan Tata took to Instagram this morning to share a post remembering his mentor JRD Tata on his 117th birth anniversary. The Chairman Emeritus of Tata Sons shared a throwback picture that was taken at the launch celebration of the Tata Estate station wagon car in 1992. "Another reminiscent picture, another memory, on JRD's 117th birth anniversary," he wrote.

Jehangir Ratanji Dadabhoy Tata or JRD, as he was known, was born on July 29, 1904. Ratan Tata has often talked about the respect he has for JRD Tata, whom he considered a mentor and a role model. "Jeh had been a dear friend, a role model, a mentor, and a person who had a profound influence on me, both at work and at home," Mr Tata had once said. In 1991, JRD Tata, who had led the Tata Group for over half a century, appointed Ratan Tata to be his successor.

This morning, Ratan Tata shared a memory from the day "one of Jeh's many dreams" came true - the day the Tata Estate station wagon was launched.

"Mr JRD Tata dreamt of the Tatas producing a 'Tata' car. Mr Sumant Moolgaokar shared in this dream," he wrote. Sumant Moolgaokar was known as the architect of Tata Motors, formerly known as Tata Engineering and Locomotive Company (TELCO).

"This picture was taken at the launch celebration of the TATA ESTATE at the Pune plant," Ratan Tata wrote while sharing the photo which shows him with JRD Tata. "One of Jeh's many dreams became a reality. On that day, TELCO too achieved another dream for India," he concluded.

The throwback photo has garnered thousands of 'likes' and comments within minutes of being posted, with many in the comments section remembering JRD Tata on his birth anniversary.

In 2019, Ratan Tata had shared an Instagram post recalling how much his mentor liked spending time on the shop floor of TELCO. "I enjoyed being there with him and seeing the genuine love and affection he got from both workers and supervisors," said Ratan Tata in his note.

Ratan Tata had shared another memory with JRD Tata on his birth anniversary last year. Remembering him as a keen aviator, he shared photos from the time he "arranged for Jeh to visit manufacturing facilities for the B1B bomber and the space shuttle."

The recipient of two of India's highest civilian awards - the Padma Vibhushan and the Bharat Ratna - JRD Tata died on November 29, 1993, at the age of 89.