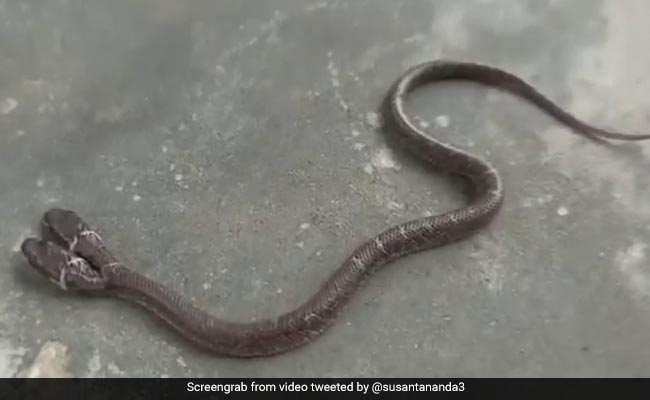 A two-headed wolf snake was found in Odisha.

According to The Mirror, the non-venomous wolf snake has two fully formed heads, meaning it has four working eyes and two tongues, but only one body. Incredibly enough, the two heads work independently of each other - which also means they were spotted fighting for food.

"A rare wolf snake with two fully formed heads was rescued from a house in the Dehnkikote Forrest range of Keonjhar district in Odisha," wrote Mr Nanda while sharing a video of the snake. He added that the reptile was later released into the forest.

A rare wolf snake with two fully formed heads was rescued from a house in the Dehnkikote Forrest range of Keonjhar district in Odisha.
Later released in Forests. pic.twitter.com/7fE0eMciEB

The video of the two-headed snake has generated huge interest online. It has been viewed more than 15,000 times on Twitter, collecting several stunned and curious responses.

Must be a challenging life for this guy.

Interesting. Curious to know about their decision making processes. Is it not behind it's slow movement?

"One among the two heads is slightly more developed and both are known to fight over food," said photographer Rakesh Mohalick, according to The Mirror. Mr Mohalick was the one who discovered the snake. He added that the two heads working independently would make it harder for the reptile to survive in the wild.

Instances of two-headed snakes, though uncommon, are not unheard of. Last year, another snake with two fully formed heads was found in the US. It was named Double Dave by the people who discovered it.