It has two fully formed heads, four eyes, and two flicking tongues, but just one body. 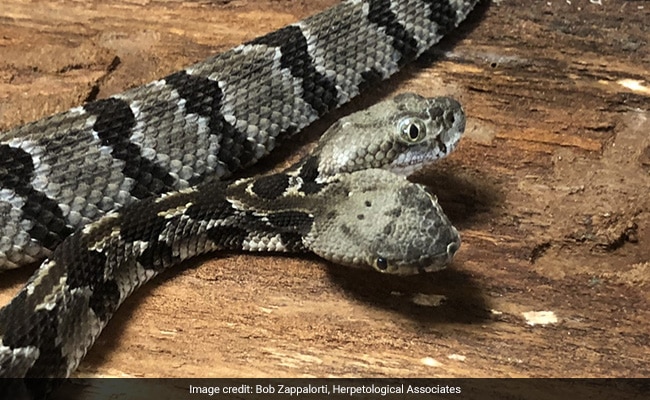 A pair of environmental consultants found a rare two-headed timber rattlesnake in New Jersey, USA, last month. ABC News reports that the reptile was spotted in Pine Barrens by two men named Dave, who both work for Herpetological Associates of Burlington County.

Given their first names and the snake's two heads, the herpetologists decided to name it Double Dave.

What makes this two-headed snake unique is that it has two fully formed heads, four eyes, and two flicking tongues, but one body.

"It would be pretty difficult for this snake to survive in the wild," Dave Schneider, one of the two environmentalists who found the snake, told BBC.

Two-headed snakes rarely survive in the wild as their slow speed makes them an easy target. Mr Schneider told BBC that the two-headed rattlesnake they discovered stiffens up while trying to escape, making it an easy prey.

The two Daves discovered the 8 to 10-inch-long snake while observing another rattlesnake give birth. They have now obtained a special permit from snake authorities for Herpetological Associates to keep and study the rare snake.

Recently, residents of a village in Bali received a shock on spotting a two-headed snake in their midst.