The festival of Raksha Bandhan is observed to celebrate the special bond between brothers and sisters. 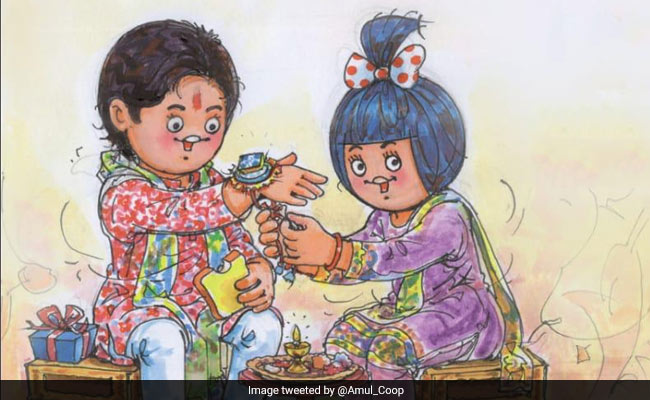 Dairy brand Amul marked the auspicious occasion of Raksha Bandhan on Monday by dedicating its new doodle to the festival of siblings.

The doodle features the Amul mascot tying the sacred Raksha Bandhan thread on the wrist of her brother who is seen seated with a loaf of bread smeared with butter in his hand and a gift lying beside him.

The brother-sister duo is seen wearing traditional attires while celebrating the festival.

Amul gave the festival a quirky twist naming the cartoon as ''Maska Bandhan'' and an additional text on it reading, ''Ye snack sabko bhaiya!''

"#Amul Topical: Celebrating #RakhshaBandhan across the country as brothers and sisters bond," tweeted Amul with the cartoon.

#Amul Topical: Celebrating #RakhshaBandhan across the country as brothers and sisters bond... pic.twitter.com/J1sB99o5AU

The festival of Raksha Bandhan is observed to celebrate the special bond between brothers and sisters.

It is marked by sisters tying the sacred thread on the wrists of their brothers while they promise to always protect their sisters from all evils.