Ashwini Vaishnaw was surrounded by a number of railway and security officials, who shared biscuits and snacks with him. 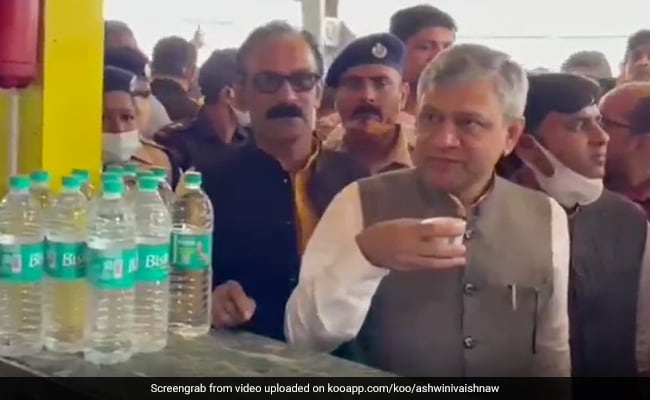 Railway Minister Ashwini Vaishnaw, on Tuesday morning, enjoyed a hot cup of tea at Jharsuguda railway station in Odisha and shared a video on social media. The minister, who is on a visit to the district to review ongoing railway projects, was filmed drinking tea and having biscuits at a tea stall on a platform. “Bahut Badhiya (very good)” he said after tasting the brew. Mr Vaishnaw then congratulated the tea stall owner for setting up a fine shop. He also went on to enquire about the number of trains that pass through station.

The minister was surrounded by a number of railway and security officials, who, too, had biscuits and snacks with him. He shared the video on Koo App. Watch it below:

Mr Vaishnaw was at Jharsuguda railway station for a surprise inspection.

Ashwini Vaishnaw joined the Indian Administrative Service in the Odisha cadre in 1994. He has worked extensively in different parts of Odisha, and his visit to the state brought back some "sweet memories".

"Sweet memories took me to Anand Bhawan shop in Jharsuguda," he wrote on Koo.

Here is a look at some reactions to his posts:

Koo App
Need more such ministers like him.- Ranajeet I Dutta (@ranajeetidutta) 9 Nov 2021

Another user said that the minister needed to look at the issue of overcharging of food at stations.

Located around 350 km from state capital Bhubaneswar, Jharsuguda is a major railway junction in north Odisha.

According to news agency ANI, Mr Vaishnaw on Monday held a high-level review meeting with the General Manager of South Eastern Railway and East Coast Railway at Jharsuguda district.