The photo was captured right after Apeksha Nimbadia participated in the graduation parade. 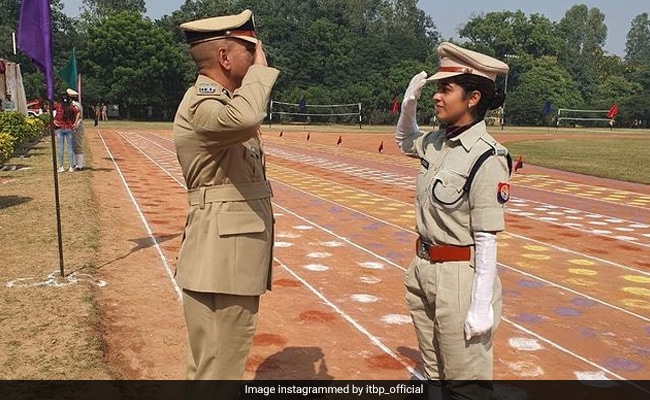 The Indo-Tibetan Border Police (ITBP) has shared an image of a woman dressed in police uniform saluting her officer father. The proud dad accepts her salutation -- and salutes her back in return. The moment is beautifully captured in the photograph that has gone viral on the Internet. “Proud father getting salute from the proud daughter,” ITBP described the image. It identified the young woman as Apeksha Nimbadia, who graduated from Dr BR Ambedkar Police Academy in Moradabad, Uttar Pradesh. Her father, APS Nimbadia, is a Deputy Inspector General in the ITBP. The photo was captured right after Ms Nimbadia participated in a passing out parade.

After graduating from college, Ms Nimbadia will join Uttar Pradesh police as a Deputy Superintendent of Police. Serving in the police force runs in the family - Mr Nimbadia is a “third-generation officer in uniform”. The Instagram account of ITBP, the country's main border patrol organisation for its border with Tibet, has shared two more photographs of Ms Nimbadia, one of which shows her with mother Bimlesh Nimbadia, who also attended the ceremony. The last frame features the father-daughter duo standing next to each other as they smile at the camera.

A user wrote, “What a proud moment.”

Others celebrated the moment by saying, “Jai Hind”.

Some have expressed their excitement by sharing a bunch of star, heart and clap emojis.

The ITBP is one of the five Central Armed Police Forces (CAPFs) of India, raised in 1962 in wake of the Sino-Indian War.