Porsche Drives Over Wall, Lands On Another Car In Viral Video

Over 4.3 million views for this parking fail. 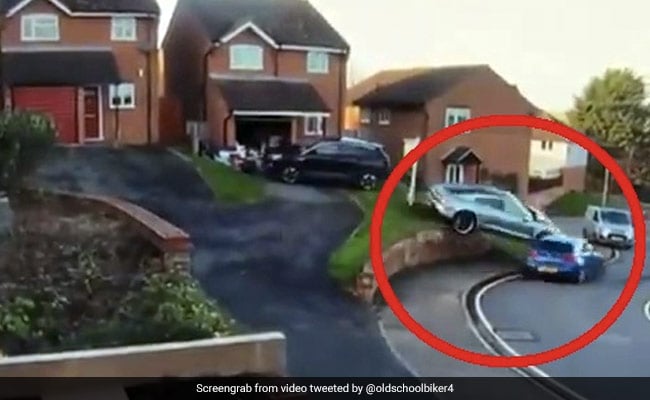 A Porsche driver lost control of his car, sending it flying over a wall.

In what is being described as the worst parking fail ever, a Porsche driver accidentally hit the accelerator, drove over a wall and crashed into another car. CCTV footage shows the motorist's disastrous parking fail as he lost control of his Porsche Taycan after making his way up a sloped driveway. According to The Sun, the footage was filmed in Manningtree, Essex in the UK.

In the clip, the Porsche is seen slowly moving up a sloped driveway. It stops before unexpectedly swerving to the right and hitting a black SUV. Then, the luxury vehicle careens over a wall and lands on top of another car parked below before crashing on the road.

According to the Daily Mail, the driver managed to escape unhurt. His brand new vehicle wasn't as lucky, though. It is believed that he had purchased the Porsche Taycan just five days before the accident occurred. The luxury vehicle is estimated to cost 83,000 pounds - or approximately Rs 81 lakh.

The video, which was first posted on YouTube, spread quickly to other social media platforms over the weekend.

On Twitter, it has garnered a whopping 4.3 million views along with hundreds of comments.

"Who knew it came with a self destruct button too," wrote one Twitter user.

It is believed that the Porsche driver was visiting a friend when the accident occurred. Viewers speculated that it was probably the result of human error, with the driver pressing the accelerator instead of brakes.