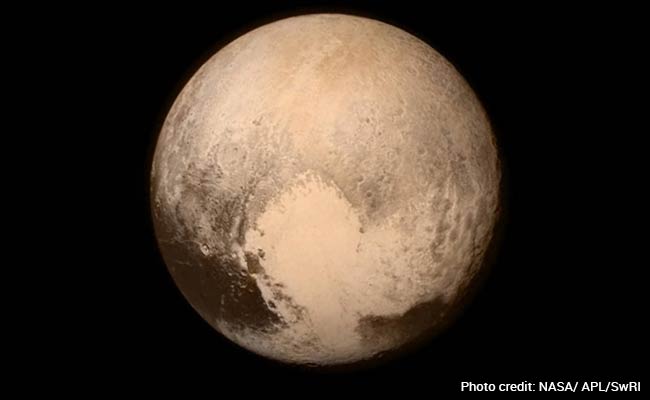 1. Pluto: In my opinion, Pluto really stole the show this year. It was early in 2015 that the New Horizons spacecraft, which launched nearly a decade ago, started sending back its first images of the distant dwarf planet. Soon those images were the best we'd ever seen of Pluto - though they were still blurry dots of light. By the time summer rolled around, we had near-constant updates from the mission, with every set of photos blowing the previously captured images out of the water. That's bound to happen when you're speeding towards a never-before-visited object at around 31,000 mph.

The year is wrapping up with the end of the Pluto imagery chapter: NASA has just started releasing the most highly resolved images taken during the July 14 Pluto flyby. It's likely that these pictures are the best we'll ever see.

That doesn't mean that New Horizons is over. The spacecraft has 16 months worth of data to send back to Earth, which means mission scientists still have about a year of new information to look forward to. And it's likely that the mission will be extended to observe an even more mysterious object - 1 million miles closer to the edge of our solar system - that New Horizons will reach on Jan. 1, 2019.

The Pluto flyby was a gorgeous moment of global excitement over science. I was so into it I got a tattoo to commemorate the occasion. Sure, people can argue over whether or not Pluto deserves its designation as a "dwarf planet," but I think that misses the point: The complexity of Pluto - which rivals that of "real" planets such as Mars - goes to show us that our galaxy is bursting with things we don't understand. Heck, our solar system is bursting with those things.

2. Misc. Space: Sorry, other space news. You're just no match for Pluto. But 2015 had a lot of exciting stuff: Tons of new exoplanets were found by Kepler, a space telescope that should have been put out of commission by a hardware failure ages ago. The dwarf planet Ceres teased us for months with a smattering of mysterious bright spots. Scientists found evidence of water on Mars right now, and evidence that the water that used to be there was plentiful and long-lasting - perhaps so much so that life could have evolved there. We also found a pretty good explanation for why all that water vanished.

And oh, that hunt for life. In April, NASA's top scientist declared that he believed we'd find signs of life within the next decade. It's no wonder, because 2015 was a really good year for ocean worlds, with Saturn's moon Enceladus revealing a potentially habitable inner-ocean and NASA putting a mission to the ocean-filled Europa in motion. The Cassini probe, a wildly successful robot zipping around Saturn and its moons, even took a dip in some of the geysers jetting out of Enceladus's icy surface. Early reports suggest that the chemistry of the water could support life, and we'll know more once the data has been properly analyzed.

Some folks even got optimistic about the hunt for intelligent life this year. Stephen Hawking stamped his name on a $100 million hunt for intelligent aliens, and scientists expressed (very) cautious optimism that a strange flickering star might be a sign of an alien civilization. It totally isn't, according to the research that followed, but it was a nice thought.

Meanwhile, NASA sent an astronaut on a year-long mission to monitor the effects of long-term spaceflight - while his identical twin, a retired astronaut, stayed home for comparison.

3. The Microbial Explosion: Let's pivot right from big things to small things: 2015 was an excellent year for research on bacteria. The microbiome is so hot right now. We learned that the hygiene hypothesis - which suggests that kids should be exposed to diverse germs early on - is probably pretty well-founded, so get your baby to a farm (or at least let them play on the floor of a subway car). Scientists revealed that our microbial signatures are stunningly unique, and might even be able to serve as a sort of fingerprint.

We also learned a lot about what those microbes can do, especially when it comes to, well, doo doo. As we reported back in January, the Fecal Matter Transplant industry is booming. More and more evidence suggests that a healthy gut microbiome can be transferred by way of a poop transplant, and that the magic happens even when you use frozen, benign pills instead of invasive colonoscopies to seed your new bacterial kingdom. And yes, you can get paid (a lot) for your poop. Just bear in mind that it's easier to get accepted to MIT than it is to get accepted as a fecal donor.

But no, your beard probably isn't full of poop. Probably.

And let's not let bacteria hog the microbial spotlight: This year a team of scientists figured out how to trick yeast into turning sugar into hydrocodone. Home-brewed heroin, anyone?

4. The Brave New World of Gene Editing: This year, rumors started circulating that a team of Chinese scientists had edited the human genome for the first time - and those rumors wound up being true. CRISPR, a cut-and-paste gene editing tool, has opened the floodgates for this stuff. While actually editing the genome of a viable human is probably pretty far off (the Chinese scientists had a pretty high error rate, and presumably wouldn't have gestated any of their edited embryos anyway for ethical reasons), I wouldn't be surprised if we saw CRISPR-customized pets within the next few years. And scientists are already working on editing animals so their organs are better suited for human transplant.

And it's never too early to freak out about ethical quandaries: Just weeks ago, researchers met to discuss the potential ethical hurdles of human gene editing at a historic summit. Their conclusion? Well, humans have kind of been playing god for a long time, so in some ways this isn't new. But it's potentially dangerous, and we need to tread lightly.