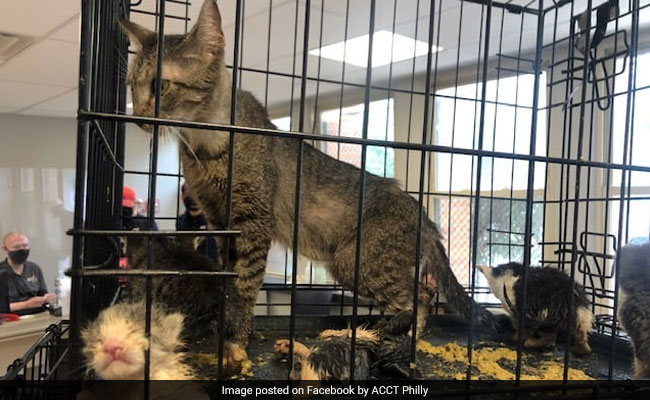 The cats were taken to the Animal Care andControl Team of Philadelphia.

Abandoned houses always have an eerie aura about them, and thanks to our favourite horror movies, one always associates deserted structures with fear and mystery. And a contractor in Philadelphia was in for a shock when the wall of an abandoned house he was working on began to make weird noises. Before you think on the lines of paranormal activity, let us tell you that the culprits in this case were cats. Not one or two of them, but an entire family that included nine adult cats and seven kittens.

It all started when the owners of the home heard meowing in the walls. The contractor found the cats in the wall and proceeded to spend nearly eight hours rescuing them. Explaining the incident on their Facebook page, the Animal Care and Control Team of Philadelphia (ACCT) said, “Sunday started out a bit differently for a contractor working on an abandoned house. The homeowners had heard meowing in the walls, and when he opened the wall, he found 9 adult cats with 7 kittens. Thankfully, he was able to get them out and bring them to us — but it took eight hours to do so.”

“We're so glad that he did, as quite a few aren't in great shape, and sadly, one of the kittens was not able to be saved. The cats are scared, some will require more socialisation, but right now they are resting in their cages,” the post added.

Sarah Barnett, the director of development and communications at ACCT told NBC that the cats were covered in urine and faeces, and likely would not have survived for much longer in the walls if they were not rescued in time. “We're really grateful that (the contractor) brought them in and he did save their lives,” Ms Barnett said.

It is likely that the cats had been trapped inside the walls for about five days, Ms Barnett said. "The outdoor cats probably climbed inside a hole in the wall to find shelter and then became trapped when the contractor filled in the hole last week," she explained.

The organisation said that this was just one such incident of rescue and that there were many more animals out there in need of help. “But they are only some of the more than 40 cats we took in today, and we know that more will come through our doors tomorrow and every day,” the post added.

Reacting to the development, one user wondered how the cats had survived within the wall at all. “I'm not even going to question the kittens but how the hell are 9 adult cats inside a wall? Questions, questions, questions... like how this happened, how long were they in the wall, what were they eating/ drinking to survive?”

Social media users were all praise for the contractor. One comment said, “Thank you a million times to the contractor that spent 8 hours getting these angels together and to safety.”

Several members also donated to the organisation and offered to adopt the cats after they had rescued.