A video is going viral on internet shows a dog walking in shallow water and its silhouette creating a mirror image through the reflection on water. 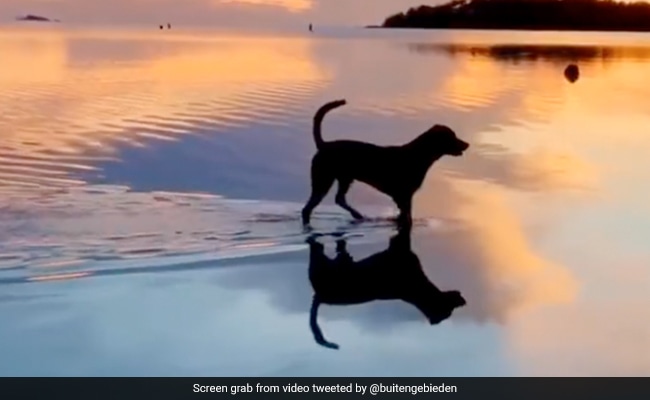 A video is gaining traction on social media that shows a dog walking in shallow water and its silhouette creating a mirror image through the reflection on water. The video appears to have been shot at dawn and is sure to take your Monday blues away. Shared by Buitengebieden on Twitter, the caption reads, "Perfect."

This is what I imagine heaven must be like, but with more dogs https://t.co/NThaILyZw2

The 13-second clip shows the alert dog slowly walking on water's surface while looking around. This viral clip has stunned and confused the internet at the same time.

Since being shared, the video has amassed over 2.4 lakh views and more than 19,000 likes on the micro-blogging platform. The post has also been shared over 2,200 times and has several comments.

"No dog can catch him, at first I thought it might be a Greyhound? Very cool," wrote one user.

A second one said, "I fear they cut the last few minutes where the shark circles."

"This is what I imagine heaven must be like, but with more dogs," wrote a third user while sharing the post.

Another video that showed two horses walking on water also went viral on social media last month. It was shared by a 58-year-old woman named Kelli Rogers when she was paddleboarding with her two grandchildren on the Salt River in Tonto National Forest, Arizona, US.

The woman pulled out her phone to record the two horses standing in the river's shallows. When she saw the video, she couldn't believe what she was seeing since it seemed as though the horses were floating on the water's surface.

The video was initially posted on TikTok by Ms Rogers but later re-shared by a page named Odingus on YouTube where it gained a lot of traction.