'Padmavat' May Not Have 300 Cuts, But That Doesn't Stop Twitter's Jokes 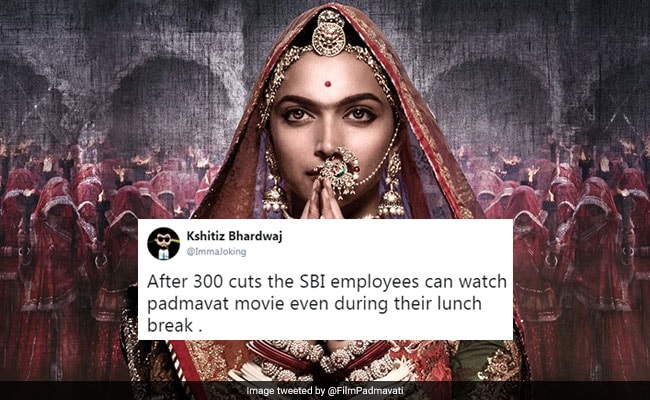 Central Board of Film Certification (CBFC) chief Prasoon Joshi may have clarified that the makers of Padmavat have not been asked to make 300 cuts to the movie, but that hasn't stopped Twitter from cracking jokes. As rumours spread that Sanjay Leela Bhansali's controversial film would be released on January 25 after going through rigorous vetting, Twitterati came out in full force to imagine what the movie would look like after the supposed 300 cuts. Here are the 10 funniest jokes about Padmavat's '300 cuts':

Padmavat has been asked to make 300 cuts by Censor Board.

Makers should now release the movie as MMS.

Surgeon: I did a total of 7 surgeries today. Made a whooping 12 cuts.

Barber: I had 27 customers today. Did 27 haircuts.

#Padmavat
Before Censor
After 300 cuts by Censor Board#Padmavatipic.twitter.com/YqV2rlv49G

After 300 cuts #Padmavat will be released during #Padman's interval break

After 300 cuts the SBI employees can watch padmavat movie even during their lunch break .

Mr Joshi clarified yesterday that the certification process of Padmavat is complete and reports about cuts are simply "untrue".

"The makers have submitted the final film with agreed five modifications, these modifications have tried to incorporate observations and suggestions given by the advisory panel and also in keeping with the sentiments of society.

Promoted
Listen to the latest songs, only on JioSaavn.com
Sanjay Leela Bhansali's Padmavat stars Deepika Padukone, Ranveer Singh and Shahid Kapoor and is based on the 16th century epic poem "Padmavat" by Malik Muhammad Jayasi. Reports suggest that it is slated for a January 25 release where it will clash at the box office with Akshay Kumar's PadMan - a fact that has led to more jokes on Twitter.