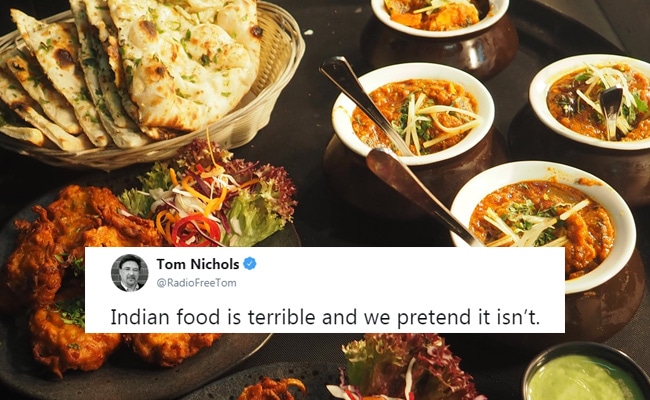 A controversial tweet on Indian food has outraged many. (Representative Image)

When US academic Tom Nichols tweeted about his dislike for Indian food, he probably had no idea it would blow up on the microblogging website, polarising opinion and triggering a massive debate online. That's exactly what happened on Sunday, when Mr Nichols responded to a tweet asking people to share their "most controversial food opinion".

"Indian food is terrible and we pretend it isn't," he wrote. The tweet immediately garnered a flood of comments, many from angry Indian food-lovers.

Indian food is terrible and we pretend it isn't. https://t.co/NGOUtRUCUN

Since being posted on Sunday, Tom Nichols' tweet has collected over 12,000 'likes' and a ton of comments trolling him. "Imagine going through life being this flavorless," wrote one Twitter user, while another said: "This is absolutely the worst take ever on this website."

Some Twitter users pointed out that his argument was inherently flawed, as there is no such thing as 'Indian cuisine' as a whole.

Well there is no “Indian” food

Unless you've literally tried every single type of Indian cuisine there is no way you can make such a general statement.

Others tried to get him to change his opinion.

So everyone is mad at this, and rightly. But rather than focus on the troll bait, let me direct you all to Netflix and to the program Raja Rasoi Aur Anya Kahaniyan, a gorgeous documentary series about the amazingly diverse cuisines of each Indian region and many subcultures. https://t.co/7K37Rys4qH

& Tom needs to discover Indian food with someone who knows it. Expertise matters ????

Top Chef host, author and model Padma Lakshmi had a sharp retort to the tweet.

Do you not have tastebuds? https://t.co/o2IVYsrr8R

And a lot of outrage was generated by the tweet.

I'll take Americans not understanding food from other cultures for $1,000

i wish i could physically fight this tweet https://t.co/EKVhVM3fR0

A few also agreed with him.

I mostly agree with this, except samosas are delightful.

Mr Nichols himself seemed unfazed by the criticism, defending his position in a number of follow-up tweets. "The only two foods that I don't eat: Ethiopian and Indian. I'm pretty open about the rest of it," he wrote in one.

Twitter: "What's your most controversial food take?"@quinncy: "Mayo is disgusting" @soledadobrien "Lettuce, why bother"@seungminkim: "PB&J is an abomination"

Me: Indian food is terrible