Read inOther Languages
This Article is From May 04, 2021 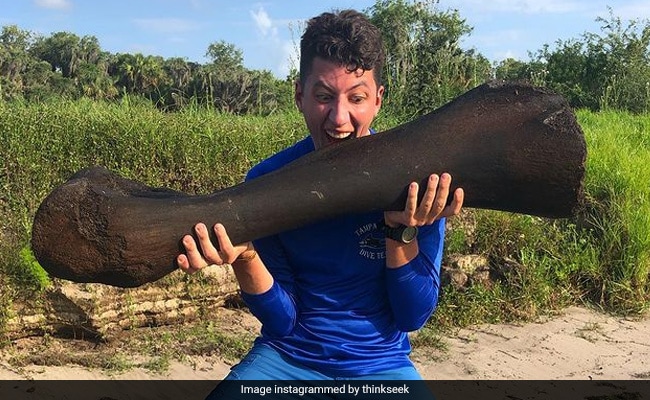 Two scuba divers from Florida discovered a mammoth four-foot, 50-pound (23-kg approximately) bone, possibly dating back to the Ice Age, while diving in a local river. Derek Demeter and Henry Sadler found the bone embedded in the sand at the bottom of the Peace River. Henry shared the image on Instagram, saying that it was a "once-in-a-lifetime" discovery.

"I was fortunate enough to find two amazing once-in-a-lifetime fossils yesterday," he wrote, adding, "Pictured here is a Colombian mammoth leg bone, and while not as rare as the other thing, it is still an incredible find. Amazingly, it is almost completely undamaged and very well mineralised."

His followers soon flooded his comments section. While a user, who went by the name 'fearlessfitgeek', wrote, "This is amazing!", 'owengilpin631' said "That's huge! It's a killer find." A third user, 'corey_reed_' commented, "No way! This is insane." Another user 'coleharken' also congratulated the duo "on the amazing discovery". An impressed follower, 'world_of_fossils' exclaimed, "Very impressive! Don't find them that big often!"

The two divers also found a tooth belonging to a saber-tooth tiger on the same expedition.

Mammoths were giant furry ancestors of the elephant that first arrived in North America over one million years ago. They went extinct about 11,000 years ago. The Columbian mammoth was the largest of its kind even reaching a height of 14-feet. These mammoths weighed about five cars stacked on top of each other, and their tusks could easy extend the width of two bicycles laid end-to-end.

This is not the first time in the recent past that a mammoth fossil has been discovered. In December, two divers found two Columbian Mammoth tusks in the Gulf of Mexico, off the coast of Venice, while diving.

When it comes to residents of Florida, of late they have been witness to a few unusual incidents. A few days ago, a cyclist had a close encounter with two alligators. Brenda Stelzer captured this moment in a video while biking through the nature trail of Bird Rookery Swamp Sanctuary in Naples. The clip shows alligators moving out of her way just in time by jumping into the adjacent stream.

In another incident, there was an extremely rare sighting of an all-white baby dolphin. The footage shows three dolphins - one adult and two calves - swimming in the waters along the coast of Florida. One of the three dolphins had an unusual colouration, which some theorised could be caused by albinism - a complete loss of pigmentation that is said to happen in about one out of every 10,000 mammals.