Ohio Woman Rescued After Boa Constrictor Wraps Around Her Face

The woman had brought the 5-foot-long snake into her home along with another snake in recent days. It's not known whether the woman faced charges or had her 10 remaining snakes removed. 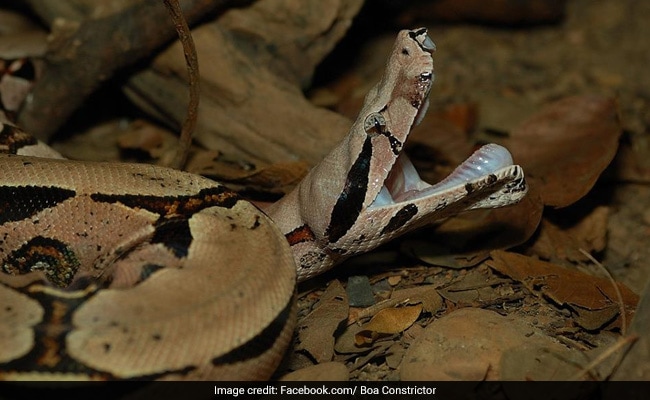 A woman was saved after a boa constrictor wrapped itself around her face. (Representational)

The snake and the Ohio woman it was wrapped around had not always been at odds.

The 911 dispatcher who answered the woman's frantic call on Thursday was able to discern some aspects of the interspecies relationship that had suddenly and dangerously soured.

There had been some sort of rescue, the woman said after giving her location in the Ohio city of Sheffield Lake and a brief, breathless description of the predicament she was in, according to a 911 recording obtained by the Elyria, Ohio-based Chronicle-Telegram. The woman had brought the 5½-foot-long snake into her home along with another snake in recent days.

They joined a growing assemblage of legless reptiles. The woman possessed nine other snakes, presumably also rescues, but they weren't loose and weren't attacking people at the moment, she told the dispatcher.

What was unclear is where the woman's rescue plan went so badly awry.

Now, she said, she was on the ground, with an unyielding boaconstrictor wrapped around her body.

"Oh, please. I have a boa constrictor stuck to my - my face," she told the dispatcher.

The dispatcher seemed incredulous: "Ma'am, you have a what?"

"A boa constrictor," the woman confirmed.

The dispatcher notified paramedics, then tried to figure out more about the woman's predicament, which was clearly petrifying her.

"Please hurry," she screamed. "He has a hold of my nose."

The snake wasn't venomous, the woman said. And it wasn't cutting off her breathing or circulation - at least not yet. But there was "blood everywhere."

"Oh, God, hurry, please. He's around my waist and he has my nose."
The woman may have been in more danger than she or dispatchers thought at the time.

A 2015 study showed that boa constrictors don't actually suffocate their prey, as The Washington Post's Elahe Izadi reported. Their squeezing cuts off the unwitting victim's blood flow, stopping oxygen from getting to the brain. Victims quickly lose consciousness, then die.

Near the end of the recording, she went silent for a while, but then sirens could be heard, growing louder, getting closer.

"It was wrapped around her neck and biting her nose and wouldn't let go," Card said. "They had to cut its head off with a knife to get it to let go of her face."

While it appeared to be the first snake attack of this magnitude in Sheffield Lake, such dangerous interactions are not uncommon, according to Born Free, an organization that advocates against owning exotic pets such as snakes.

The organization catalogued more than 471 attacks by snakes between 1995 and 2013. The numbers are probably higher, the organization said, if unreported incidents are factored in.

"Clearly this is a national problem," Adam Roberts, then executive vice president of Born Free USA, said in a news release. "We are seriously concerned about the epidemic of owning deadly snakes. Large snake ownership remains unregulated or poorly regulated across the country. . . . Snakes are wild animals who cannot be trained and at any time can display their normal wild behavior, which may include a poisonous bite or strangulation."

The Sheffield Lake woman was rescued, but it's unclear what became of her snakes and of her.

Police said no report had been taken; it's not known whether the woman faced charges or had her 10 remaining snakes removed.

Boaconstrictors are not listed as one of the dangerous wild animals prohibited under the Ohio Dangerous Wild Animal Act. (Other snakes, including various species of anacondas and pythons, are on the list.)

Promoted
Listen to the latest songs, only on JioSaavn.com
All a reporter found at the scene were the remnants of what had transpired: an empty glass cage on the sidewalk and a small puddle of blood in the driveway.