Baffled scientists say it is incredibly rare for octopuses to end up on dry land and suggest the eight-legged sea creatures may have been confused or injured by recent storms. 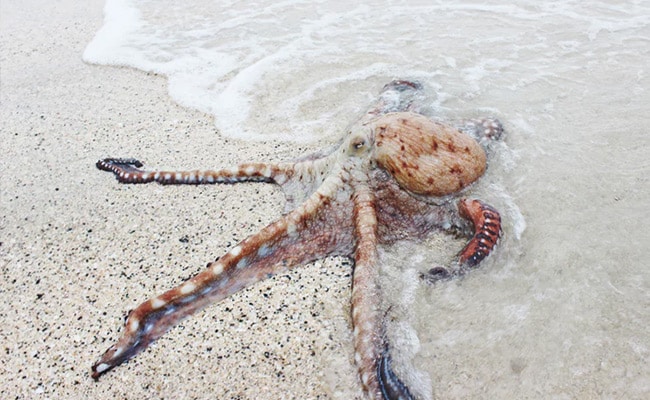 Octopuses were spotted crawling out of the water and onto the beach in Wales, UK (Representational Image)

Over 20 octopuses were witnessed crawling out of the sea and onto the beach in Ceredigion, Wales. And the bizarre "octopus invasion," as British media has reported it, wasn't just a one-time occurrence. A Welsh boat tour operator says he saw the octopuses "walk" out of the sea on three consecutive nights. He managed to film on one of the nights and posted the video to Facebook, where it is being shared widely.

Brett Stones, who runs SeaMor Dolphin Watching Boat Trips, tells BBC Wales that he helped return a number of the octopuses to sea and encourages anyone who spots the creatures to do the same.

Describing what he saw to WalesOnline, Mr Stones says: "They were coming out of the water and crawling up the beach... I've never seen anything like it before. They were walking on the tips of their legs."

On Facebook, Mr Stones writes a number of the cephalopods were found dead on the beach the next morning, suggesting they may have gotten confused and stranded on dry land.

Harry Potter author JK Rowling tweeted a BBC report of the incident, writing, "As if 2017 wasn't crazy & terrifying enough, the octopuses are mobilising."

As if 2017 wasn't crazy & terrifying enough, the octopuses are mobilising. pic.twitter.com/2vfN3uTQFn

Calling the behaviour "extremely odd," Dr Steve Simpson, a lecturer in marine biology at the University of Bristol, tells The Telegraph it is incredibly rare for octopuses to venture on dry land this way.

Promoted
Listen to the latest songs, only on JioSaavn.com
The Telegraph suggests that recent storms that battered the Irish Sea may be to blame for the "octopus invasion."

"It could simply be injuries sustained by the rough weather itself or there could be a sensitivity to a change in atmospheric pressure," says James Wright, curator at the National Marine Aquarium, adding that either way, the strange sighting "suggests there is something wrong with them, I am afraid."Click for more trending news

Ratan Tata Praised For Speaking Up Against Online Hate And Bullying