No, That's Not A Snake. Viral Video Leaves Many Baffled

"What is that??" asked a Twitter user while sharing the video. 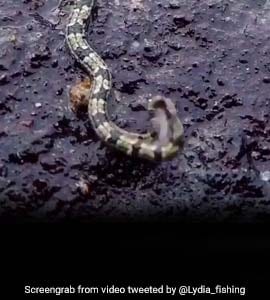 Can you guess what animal this viral video shows?

Nothing captures social media's attention like the mystery of the unknown - and this video going viral online is proof. The video in question initially appears to show a snake slithering across a rock. A few seconds in, however, the serpent-like creature reveals itself fully - and it is, in all probability, unlike anything you have seen before.

The animal in the video has five appendages extending from a central disc. Each 'arm' is long and slender, giving it the appearance of a snake. In the video, it slowly slithers across the rock using each appendage and lowers itself into water.

"What is that??" asked Twitter user Lydia Raley while re-posting the old video on the microblogging platform a few days ago. Take a look:

Since being shared on Twitter, the video has collected nearly 3 lakh views and a ton of intrigued comments. Many were left baffled by the creature and flooded the comments section with guesses and more questions.

Or just a manifestation of the disaster that is 2020?

Something that will make you wish it were a snake...

You wish it was a snake pic.twitter.com/tu3PH2nUzb

While many came up with outlandish theories - including five snakes sharing a hat and baby Cthulhu - some Twitter users managed to identify the creature as a brittle star or ophiuroid.

Brittle stars are sea creatures that are closely related to starfish and are also known as serpent stars. There are more than 2,000 species of brittle stars, and many of them are found in deep sea. They crawl across the ocean floor using their long arms.