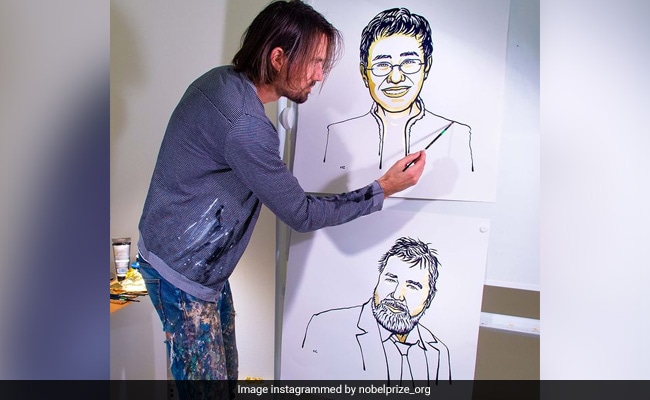 Niklas Elmehed has been responsible for the official Nobel announcement portraits since 2012.

Niklas Elmehed is part of an exclusive club that can boast of knowing the names of Nobel Prize recipients before they are announced to the rest of the world. He is not a member of the panel of judges, but the man whose gold-leafed portraits of the Nobel Prize winners are used in news articles, publications, magazines and social media posts across the world every year.

The Sweden-based artist says that the idea of using paintings, rather than photographs, while announcing the winners stemmed from necessity. "Many of the science laureates are pretty hard to get pictures," Mr Elhemed explained to Popular Science in an interview two years ago. "If you search for a photo, it's a highly pixelated, low-res image on a webpage somewhere in the world. You just find their face on the staff members page, taken with a lousy camera."

Before 2012, the Nobel announcements were accompanied by whatever low-resolution images of the awardees that the committee could find online.

"I was hired as the art director of Nobel Media and responsible for all visual content during the announcements 2012," Mr Elhemed explains on his website.

In 2017, the Nobel Prize went through "a graphical makeover". It was decided that the main color for the announcements would be gold, so Niklas Elmehed came up with the idea of using gold foil in his portraits.

"I experimented a lot with different gold paint and fell for the gold foil, a super thin metal foil that you can put on the painting with a special glue. Together with black outlines, painted on a white background I think the portraits has a very strong and exclusive impact," he says.

The artist is not allowed to reveal exactly how far ahead he gets to know the names of the winners, but he does say that he works "pretty fast" and can finalise a portrait in "a few hours".

This Viral Trend Just Got More Adorable, Thanks To Jasprit Bumrah, Sanjana Ganesan