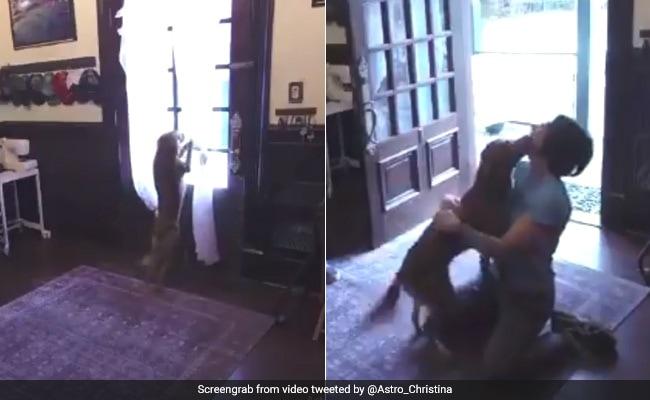 NASA astronaut Christina Koch returned to Earth this week after spending nearly 11 months in space. After the record-breaking stay at the International Space Station - 328 days is the longest single spaceflight by a woman, according to ABC News - Ms Koch returned to her Texas home and a very happy dog.

A video she posted to Twitter on Thursday has captured their joyous reunion.

In the adorable video, her dog LBD, which stands for Little Brown Dog, is seen eagerly waiting for her. She paws at the door and wags her tail vigorously as Christina Koch and her husband approach. When they open the door, LBD is seen hopping around excitedly, too happy to stay still except for the few seconds when she stops to lick her owner's face.

"Not sure who was more excited. Glad she remembers me after a year!" wrote the 41-year-old NASA astronaut while sharing the video.

Not sure who was more excited. Glad she remembers me after a year! pic.twitter.com/sScVXHMHJn

The video has gone viral with a whopping 2.2 million views in a day. It has also collected thousands of reactions, including one from NASA.

this video is EVERYTHING 😭

There are three kinds of happy:

Ms Koch returned to her home in Galveston, Texas, three days after landing in Kazakhstan.

"After 328 days in space, the first six days back on Earth were full of just as much wonder and excitement," she said to CNN. "We all live on a wonderful planet and it's great to be back."