The marvelous Mandarin duck, with its orange feathers and purple chest, has sent social media users and bird watchers into a tizzy 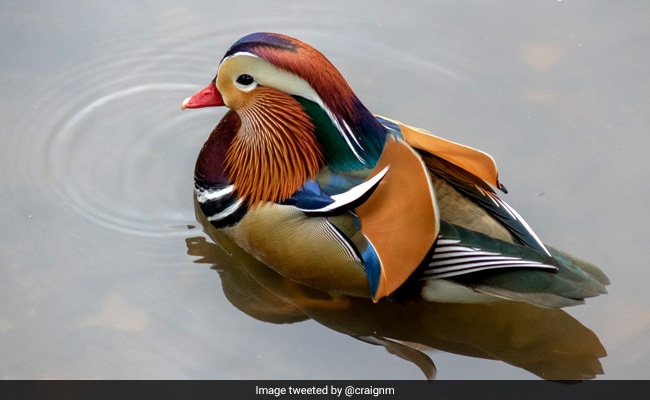 Photos of the Mandarin duck have flooded social media

Enthusiastic bird watchers are converging at New York City's famous Central Park to catch a glimpse of an unusual visitor - a Mandarin duck. The brilliantly-coloured duck, a native of East Asia, was first spotted near the pond of the park in October. A video of the duck was shared on Twitter, where it soon went viral, collecting thousands of views.

The Central Park Pond's newly-arrived male Mandarin Duck (we still do not know how it got here) unseated the Wood Duck as prettiest duck in the park. Gus Keri brings us close-up video pic.twitter.com/cauqVt4kSK

The appearance of the male Mandarin duck in the Manhattan has left people amazed, because these birds are usually found in China and Japan, not in the United States. Moreover, none of the zoos in the area have reported a Mandarin duck missing. And, according to the New York Times, ducks aren't allowed to be kept as pets in the city.

However, park and wildlife officials in New York City have decided that since the duck seems perfectly at home in Central Park, they will not make any efforts to capture and rehome it.

Urban Park Ranger John McCoy told Gothamist on Wednesday that the current plan is to leave it alone. "The animal, from what we've seen and heard, is healthy. It's able to fly, it's able to feed, and it seems to be social with the other water fowl in the park," he said. "So, there's no risk of anything bad or negative happening, and the animal itself isn't hurt, from what we can see. So right now we're going to leave it alone."

Meanwhile, the marvelous Mandarin duck, with its orange feathers and purple chest, has sent social media users and bird watchers into a tizzy. Photos show people gathering at the park, cameras ready, just to catch a glimpse of the bird.

Can we all give a warm welcome to Central Park's newest resident, this spectacular Mandarin Duck! Showed up several days ago and it's made itself right at home (despite being native to east Asia) #mandarinduckpic.twitter.com/5iIVPGhVcU

Here's a close-up view of a rare Mandarin duck from Asia that has settled in at a pond in NYC's Central Park. How it got there is a mystery pic.twitter.com/pzFrRL9OuQ

I dragged Brennen all the way to Central Park just to see this duck. pic.twitter.com/iU3Br4GTah

Beautiful Mandarin Duck in Central Park - with an audience... pic.twitter.com/Pt6r6aNjpr

This gorgeous and rare-looking duck was recently spotted in Central Park. OMG, look at the number of colors on this bird. #MandarinDuckpic.twitter.com/kb3wnu1IAw

As to the mystery of how the duck got to Central Park, it is speculated that somebody abandoned it there after keeping it as a pet illegally.