Samples from the sea creature will be sent for testing so scientists can discover its true identity. 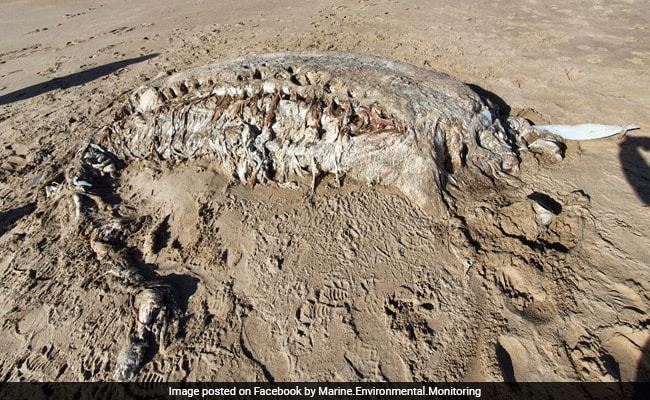 A 23-foot sea creature has washed ashore in Wales.

A mysterious sea creature stretching more than 23-feet has washed up on a beach in Wales. The creature was found on Broad Haven South Beach in Pembrokeshire, Wales, last week. The decomposing remains of the sea creature couldn't be used to make a firm identification, reports The Mirror. Instead, samples from the sea beast will be sent for testing so scientists can discover its true identity.

Photos released by Marine Environmental Monitoring, a partner organisation within the UK Cetacean Strandings Investigation Programme, show a decomposing carcass with no head.

"Due to the ongoing risk posed by COVID we have limited the amount of strandings we attend to only the more unusual ones. Thursday the 25th we got a call to a very large blob that had washed up on Broad Haven South beach," the organisation wrote on Facebook.

"within one of the pictures we had been provided it looked like there was a possible large roll of something within the stomach. Due to this we decided to attend."

The "large roll" turned out to be the creature's vertebrae.

The sea beast was at first thought to be a whale. However, experts who reached the spot later ruled that out. "On arriving it became clear that it was not a whale and instead some form of large fish," Marine Environmental Monitoring wrote on Facebook.

"It's very difficult to tell for certain what it is because it's so badly decomposed," Mr Westfield said.

"Basically I got a report of a blob - a huge thing that washed up on a beach. And the lady that actually reported it to us had done a bit of research and had initially come back saying that she thought it might have been a basking shark," he added.

Basking sharks are the second-largest living sharks - only whale sharks are bigger than them. Further testing will reveal whether this creature is actually a basking shark or something else.