She Lost Both Hands In Bomb Blast. Her Story Is A Lesson In Winning Life

"A bad phase or a disability is a chapter in your book... it's not the entire story," she says 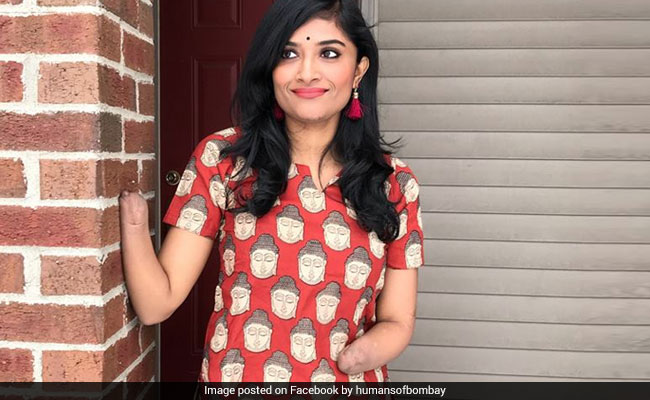 She proves nothing is impossible if one puts their mind to it.

If ever there was a lesson on turning a tough situation on its heel and coming out as a survivor, no one could teach it better than Mumbai's Malvika Iyer. A motivational speaker and activist now, Ms Iyer lost both her hands after a freak accident when she was just 13. It was a long road to recovery but she didn't just survive, she made her life such that she's now an inspiration for everyone. Her story, shared on the Humans of Bombay Facebook page, is touching a chord with many.

In her post, Ms Iyer describes how she met with the accident that changed her life. "There had been a fire at an ammunition depot near by that left fragments everywhere, and a grenade landed up in my garage - it exploded when I held it," she says. "I'd lost both my hands and sustained severe injuries to my legs including paralysis of the nerves."

After initially being confined to a wheelchair, she learnt how to walk again and use a pair of prosthetic hands. After that, there was no looking back. From finishing Class 10 with the help of a writer to achieving a State rank post it, to studying further and even completing her PhD, Ms Iyer proves nothing is impossible if one puts their mind to it.

While it took her time to accept herself for who she is, her lesson on self-love is one all of us need. "I decided to celebrate me - In 2012, on the anniversary of my accident, after years of insecurities, hiding my new body, and a million stares and questions from strangers later, I finally wrote down what had happened and published it on my Facebook - that post went viral!"

Promoted
Listen to the latest songs, only on JioSaavn.com
She also talks about her first TEDx talk that was only the beginning of many more speeches and even more achievements. "Last year I got invited to speak at the UN Headquarters and even to Co-Chair the World Economics Forum's India Economic Summit in New Delhi!" she says.

She admits her life has been full of ups and downs but boy - does she show exactly how one should live it. Read her story in its entirety below. It will leave you inspired and bring a smile to your face.
Click for more trending news

Viral Video: Man Takes Nap With 2 Pythons Crawling Over Him, Internet Asks "How Can You Chill?"