"Of all the videos that did the rounds yesterday about the rains in Mumbai, this one was the most dramatic," wrote the Chairman of Mahindra Group. 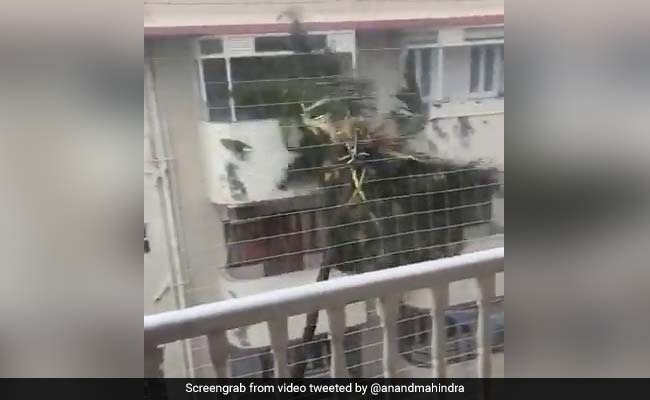 The city of Mumbai has been pounded by torrential rainfall since Monday evening. As cyclonic winds reaching speeds of up to 107kmph hit Mumbai and its neighbouring areas, they disrupted suburban train and bus services and shut down offices. Maharashtra Chief Minister Uddhav Thackeray has asked people to stay indoors and venture out only for essential work as rains, thunder and strong winds continue to batter Mumbai. Dramatic videos that have emerged from the Maximum City show the full impact of the heavy downpour and strong winds.

Businessman Anand Mahindra took to Twitter this morning to share a video that has gone massively viral on social media. The video shows a tall tree swaying wildly from side to side, thanks to the strong winds that have battered the city. "Of all the videos that did the rounds yesterday about the rains in Mumbai, this one was the most dramatic," wrote the Chairman of Mahindra Group while sharing the clip.

Of all the videos that did the rounds yesterday about the rains in Mumbai, this one was the most dramatic. We have to figure out if this palm tree's Tandava was a dance of joy—enjoying the drama of the storm—or nature's dance of anger... pic.twitter.com/MmXh6qPhn5

Another Twitter user shared a video where a man can be heard comparing the waterlogged streets of Mumbai to Venice. The 14-second clip shows vehicles half-submerged in water as they move along the road.

This was send on my family group chat featuring some classic gujju uncle commentary #MumbaiRains#MumbaiRainsLive#MumbaiRainpic.twitter.com/elQ2w4j0iR

In another jaw-dropping video that is viral on social media, two men can be seen floating down a waterlogged street on a makeshift raft.

Meanwhile, one video that is warming hearts on social media shows a man in the Wadala area of Mumbai riding with a kitten he rescued amid heavy rainfall. The video, shared by news agency ANI, is being widely viewed and circulated on the microblogging platform, where many have praised the man for rescuing the animal.

#WATCH A local in Wadala area of #Mumbai carries a kitten on his motorcycle after rescuing it, amid heavy rainfall in the city. He says, "I am taking the kitten home." pic.twitter.com/4qawgwJQzP

Massive water-logging has taken place in low-lying areas of Mumbai. South Mumbai's Colaba area reported its heaviest single-day rainfall in August in 46 years on Wednesday. The weather department has warned of more rainfall over the next few hours.

Watch: Alligator Sneaks Up On Friends Fishing In Florida Everglades