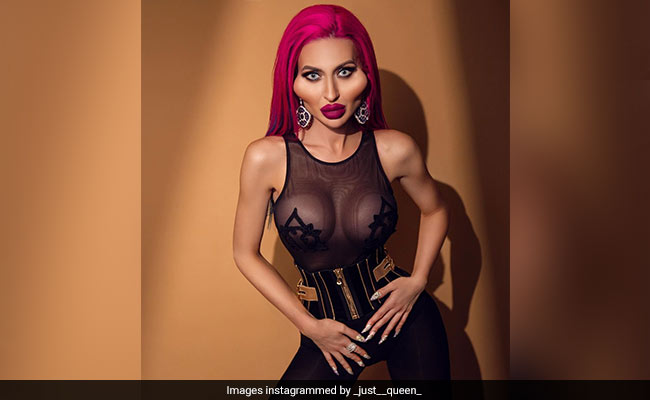 A Ukrainian model who claims to have the world's biggest cheeks has shared throwback pictures showing how she used to look before undergoing various face-altering cosmetic surgeries. Anastasia Pokreshchuk is today famous for her protruding cheeks and enlarged lips. According to The Sun, these are the result of several cosmetic surgeries and procedures, including facial fillers and Botox injections.

Anastasia Pokreshchuk, 32, has spent the last six years transforming her appearance, spending over $2,100 - or approximately Rs 1.5 lakh - in a bid to get a unique appearance. On Instagram, she has gained more than 2 lakh followers by sharing photos of her extreme body modifications.

Most of her pictures feature her with pink hair, contact lenses and dramatic makeup. However, the model recently took to the photo and video sharing platform to share throwback pics in which she looks completely different.

"Transformation - 26 and 32. Who will you choose?" Anastasia wrote while sharing before and after pics. Photos from her pre-surgery days show Anastasia had brunette hair and no facial fillers, and wore minimal makeup.

The post has racked up more than 22,000 'likes' and hundreds of comments, with many saying that the model looked "unrecognisable" in her throwback pic.

Anastasia Pokreshchuk followed it up with another old pic of herself.

According to The Mirror, Anastasia was 26 when she got her first facial filler.

"After I had the injections and saw the changes in my cheeks, I fell in love with them," she was quoted as saying, adding that she has lost count of the number of procedures she has had.

"I understand that they look weird for other people but I don't mind."