She didn't win the contest but won many fans 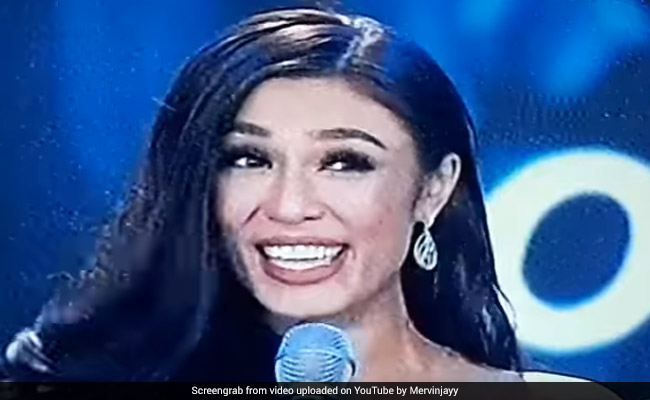 Remember the scene from Sandra Bullock's 2000 hit Miss Congeniality where when asked "What matters the most to you?", all contestants of the Miss USA pageant gave the cliched answer - "world peace". Beauty pageants are often accused of being scripted and contestants' answers rehearsed but a participant from the Miss Philippines competition is winning praise for her refreshingly honest answer during the Q&A round.

Sandra Lemonon was the first of the Top 15 contestants who were called upon stage for the question round of Binipining Pilipinas (Miss Philippines). The contestant was asked about her opinion about a government scheme.

"What are your insights on the government's 'Build, Build, Build' program?" the judge asked her.

Instead of a rambling rehearsed answer, Ms Lemonon admitted in front of thousands of audience members that she didn't know about the project.

"The insights of the government's 'Build, Build, Build' program. Actually, you know what, I studied so much for this Q&A, but sadly that's something that I don't know really much about. But, at least I'm here trying to answer a good question. Thank you!" she accepted graciously on stage.

The beauty pageant contestant's honest admission about not knowing the answer impressed host and 2015 Miss Universe Pia Wurtzbach who lauded the contestant.

Si Sandra Lemonon is me during an exam. No explanation needed#BbPilipinas2018pic.twitter.com/VQeXnvaYa0

"I have prepared for this Q&A but I have no idea what to answer, so thank you.."

Be a Sandra Lemonon in this world full or pretentious and pabibos. #BbPilipinas2018

Sometimes, intelligence does not only require preparation. It requires honesty. Being intelligent is being honest in admitting that we don't know everything.
Cheer up Ms. Sandra Lemonon#BbPilipinas2018