Raccoon Makes It To Top Of 25-Storey Skyscraper Through 'Superpowers'

Raccoons are impressive survivors and clever, in their own go-for-it way, say experts 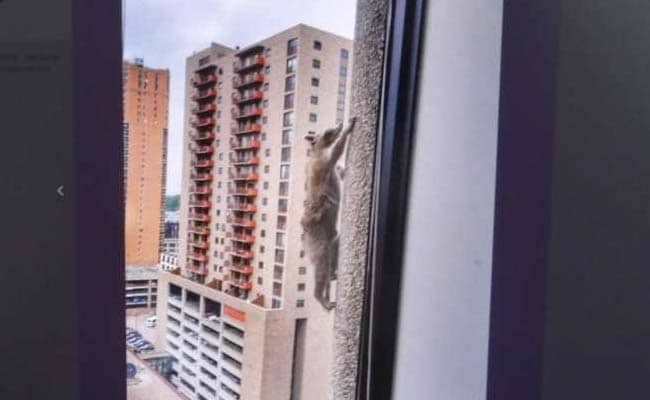 The critter climbed the 25-storey UBS tower in Minnesota, US (AFP)

As a raccoon spent much of Tuesday climbing a 25-story skyscraper in downtown St. Paul, Minnesota, the world watched, terrified that this suspense story would end in a tragic plummet. (It didn't.)

Suzanne MacDonald, a York University psychologist who studies urban raccoons, was similarly gripped, but she wasn't worried about its hero. Why? Because raccoons - as their black masks might suggest - have "quite a few superpowers," she explained not long after the drama ended Wednesday morning. The most obvious of those talents: a crack climbing ability.

The furry carnivores, which are native to North America and have thrived in its cities, possess limbs with great strength and five-toed paws with long claws and incredible dexterity. Those allow them to break open clams and trash bins, and to scale construction cranes and chimneys and soaring trees. Their hind feet can rotate 180 degrees for easy descent. Vertigo almost certainly doesn't afflict them.

"Their dexterity is really remarkable," said Sarah Benson-Amram, a University of Wyoming assistant professor who runs a lab that studies raccoon cognition. "If you watch videos of raccoons in the wild, you see moms carrying kits in their mouths, climbing up really tall trees with arms outstretched around the trunk, working their way up."

St. Paul's UBS Tower, with its pebbly surface, presented no major challenge other than its height, which would have exhausted even an Ironman raccoon. By the time MacDonald tuned into the drama Tuesday evening, the animal was napping on the 23rd-floor window ledge, and she said she knew it was "headed for the top and was just taking a break."

Both raccoon experts - there are not many in the world of academia, despite the animal's reputation for intelligence - said they cheered the Minnesota critter's feat as a chance for raccoons to be admired rather than maligned as pests, "trash pandas" and disease carriers. Sure, they can be all those things, they say. But raccoons are also impressive survivors and clever, in their own go-for-it way.

Not that #MPRraccoon would have been happy about having gone for the peak. MacDonald said it probably got into that spot thanks to another power that is only sometimes super: neophilia. Urban raccoons, unlike their rural brethren, tend to approach new things. That can get them warm nesting spots in attics but also get them sheepishly stuck atop cranes. This one, which the company that trapped it early Wednesday told the Star-Tribune was a young female - probably started out by pursuing eggs in pigeon nests on a lower ledge of the office complex, MacDonald said, then got spooked and went up when construction workers offered it a makeshift ladder to help it reach the ground.

"They don't plan things out. They don't say, 'If I climb this building, I will be stuck.' They just do the thing and regret it later. It makes them very successful in the city, because they grab onto things and do things and fiddle around with things," MacDonald said. The animal would have been tired and thirsty, but probably not too scared, hundreds of feet above the pavement, she added.

"If I were to caption it, it'd be like: 'Oh my god, I've made a terrible decision. I deeply regret this now. I shouldn't have gone up,' " MacDonald said.

Another raccoon superpower: paw sensitivity that allows them to "see" an object best by touching it. This is heightened underwater, which is why they have a false reputation for washing their food, MacDonald said. They're actually feeling it out - and figuring it out.

But are raccoons supersmart? The answer depends on the definition, but it's not clear in any case because there's been little research done on them. In the first half of the 20th century, they were the subjects of a few comparative behavior tests. But they turned out to be poor lab animals because of their talent for breaking out of cages. "So eventually, [the researchers] just gave up and went back to rats and pigeons," Benson-Amram said.

MacDonald said she's not sure they possess intelligence in a critical thinking way so much as an "insatiable curiosity" that leads them often enough to success. This is particularly true of urban raccoons, which she has found are far better than their rural counterparts at breaking into garbage cans bound by bungee cords.

More recently, MacDonald has tested raccoons' sense of object permanence, or the understanding that objects that disappear from sight aren't gone forever. It's what makes peek-a-boo fun for human babies, who start to figure out that secret between 4 and 7 months of age. Puppies begin to develop this awareness at around five weeks, according to some research.

But the baby raccoons MacDonald tested - by placing food under a cup as they watched - didn't figure it out even at 160 days old. Adult raccoons did manage to get the food, but that's because "they just attack and destroy the cups," MacDonald said.

One of Benson-Amram's doctoral students gleaned some similar insights after using a classic cause-and-effect test to see whether three captive raccoons could get a marshmallow floating in a column of water. They could use a heavy ball, which if dropped would raise the water level to the point where the marshmallow was reachable, or a light ball, which wouldn't. In the end, the subjects got their treats, but not how the researchers expected: One knocked the heavily-weighted column over. Two sometimes used the heavy ball but sometimes pushed the light ball into the water, which worked by splashing bits of marshmallow upward, turning "the nonfunctional object into a functional one," Benson-Amram said.

"They have a very unique way of approaching the world, and I think they're very intelligent in their own way, although we're just starting to study this systematically," said Benson-Amram, who somehow missed the raccoon news out of Minnesota until Wednesday morning. "When I saw it, I wasn't shocked. I was like: 'Oh, OK, it's a raccoon. They do amazing things all the time, things we don't know they're capable of."

MacDonald missed the first part of the raccoon thriller because she was watching a heist comedy, "Ocean's 8," and then dining with friends, where she politely did not check her phone. "I was off Twitter for like three hours, and it was the most exciting three hours ever!" she said.

She said she wished the raccoon's trappers, who told Minnesota Public Radio that the animal would be released on private property in the suburbs, would let it go near the UBS Tower. That's because urban raccoons tend to have a very small turf, and adapting to the country won't be easy - even for a critter able to mount an office building, she said.

Promoted
Listen to the latest songs, only on JioSaavn.com
"We certainly attribute a lot of intelligence and intent to them, which I don't think we should," MacDonald said. "They are not evil geniuses. An evil genius wouldn't have ended up on top of a skyscraper."