Metallica, the legendary rock band, took to Instagram on Tuesday and shared a video, which shows Eddie Munson Performing in the series on their song. 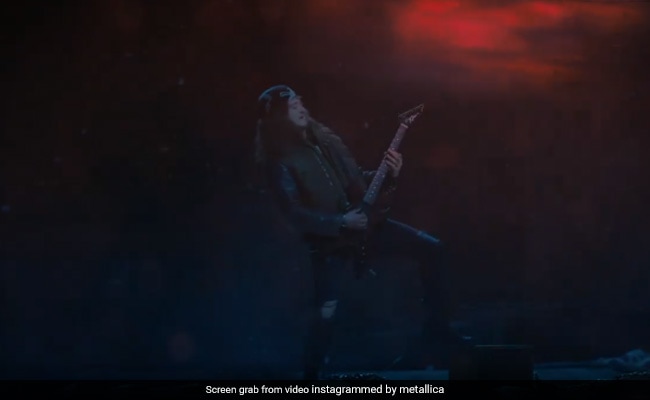 The final episode of Netflix Series Stranger Things Season 4 was a big hit among fans. As the last two episodes released on July 1, several scenes in the series drew viewers' attention.

The series first boosted the popularity of Kate Bush's Running Up That Hill. And now that the final two episodes of Season 4 have aired, another song is gaining popularity: Metallica's Master of Puppets, which is performed by the heroic Eddie Munson in the Upside Down. The band has now spoken out publicly about the use of their hit song.

Metallica, the legendary rock band, took to Instagram on Tuesday and shared a video, which shows Eddie Munson performing upside down to divert the bats from his friends. They also praised actor Joseph Quinn, who played "Hellfire Club" leader Eddie Munson and shredded on the guitar.

"The way The Duffer Brothers have incorporated music into Stranger Things has always been next level, so we were beyond psyched for them to not only include "Master of Puppets" in the show, but to have such a pivotal scene built around it. We were all stoked to see the final result and when we did, we were totally blown away... it's so extremely well done, so much so, that some folks were able to guess the song just by seeing a few seconds of Joseph Quinn's hands in the trailer!! How crazy cool is that?" the band wrote.

"It's an incredible honour to be such a big part of Eddie's journey and to once again be keeping company with all of the other amazing artists featured in the show," it further said in the post.

The video has received over 2.4 million views in just one day, leaving fans speechless. Users have flooded the comment section with praise for both the music and the performance.

"Best scene ever," a user wrote.

While another said, "Thank you for letting your music be a part of this scene. "