The Bugatti and the Porsche tried to overtake a motor home in Switzerland. 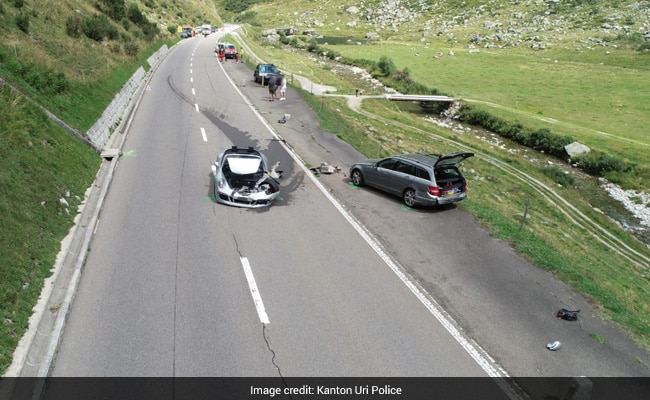 A Bugatti, a Porsche and a Mercedes were involved in a crash in Switzerland.

A motor home, a Mercedes-Benz C-Class wagon, a Porsche 911 Cabriolet and a Bugatti Chiron were all involved in a car crash in Switzerland that caused damages worth $4 million. According to a statement released Wednesday by Kanton Uri Police, the incident took place at the picturesque Gotthard Pass in the Swiss Alps.

After that, the Bugatti reportedly hit the Mercedes while the Porsche collided with the motor home.

According to Uri Police, the total damage of the accident came to 3.7million francs or approximately $4 million. "The Gotthard Pass road had to be temporarily closed for the rescue and rescue work. Several private towing services, the National Roads Office, the Uri ambulance service and the Uri cantonal police were in action," police said.

According to Car Buzz, the Porsche suffered the most serious damage in the accident. The Bugatti, estimated to be worth $3 million, saw its grille, front bumper and hood damaged.

Fortunately, there were no casualties in the crash. The driver of the Mercedes C-Class wagon was rushed to the hospital for his injuries.

In June this year, a brand new Lamborghini was wrecked in a crash that occurred just 20 minutes after it was purchased.