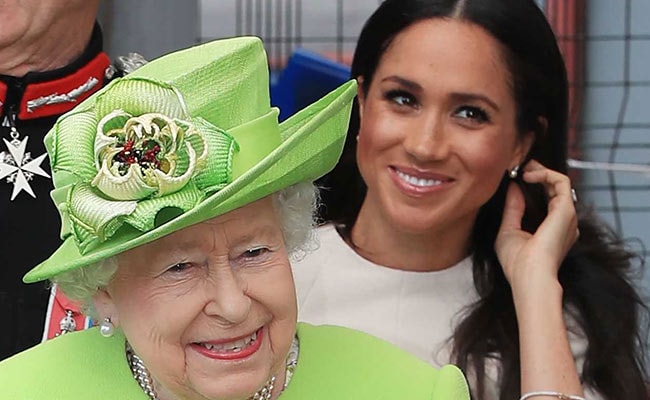 Meghan Markle's earrings were a gift from the Queen.

The newly-wed Duchess of Sussex, Meghan Markle, certainly seems to be getting on well with the royal family. After pictures of her laughing with Queen Elizabeth II at their first royal engagement together went viral, it was revealed that the earrings she wore were also a gift from the Queen herself.

The Duchess recently wore a beautiful pair of pearl and diamond earrings gifted to her by none other than Queen Elizabeth II herself as the two spent the day together in Cheshire, England for their first royal engagement together without Prince Harry.

For the outing, Meghan wore the earrings with a peach-coloured, black-belted Givenchy dress. She also sported black pumps and a black clutch.

The Buckingham Palace confirmed the same to E! News.

It is, however, unclear if the earrings are from the Queen's personal collection or were bought especially for the Duchess.

Earlier as well, the Queen had loaned Meghan the bandeau tiara of Queen Mary from her personal collection to wear at her wedding to Prince Harry.

During the day-long outing, Meghan and the Queen observed national silence in memory of the people who died in the Grenfell Tower fire, a year ago.

They also watched a performance from the Fallen Angels Dance Theatre.

At the end of the visit, both of them visited the Chester Town Hall where the Queen unveiled a plaque to commemorate the visit.

Promoted
Listen to the latest songs, only on JioSaavn.com
Prince Harry, sixth in line to the British throne, and US actor Meghan Markle sealed their wedding vows with a kiss outside Windsor Castle's St. George's Chapel last month, cheered on by thousands.