Meet The Kerala Man Who Spent Over 4 Hours With Head Covered In Bees, Set World Record

"Bees are my best friends and I wished others too can love my friends as I do," says Nature MS. 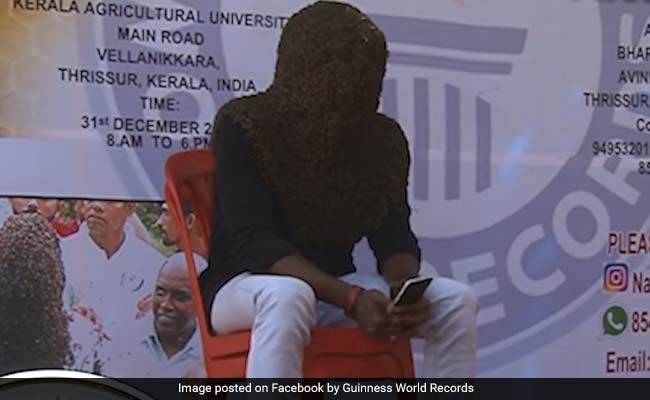 Nature MS sat for over 4 hours with bees covering his head to earn a world record.

Even the thought of a swarm of bees is enough to give most people nightmares. One man in Kerala, however, loves bees so much that he has no qualms letting them sit on his face for hours on end. Nature MS is a beekeeper who has earned a world record for spending the longest duration of time with his head covered in bees. According to Guinness World Records, the 24-year-old spent four hours, 10 minutes and five seconds with his head completely submerged in bees to earn the record.

"Bees are my best friends and I wished others too can love my friends as I do," Nature MS tells the Daily Mail.

His father Sajayakumar was an award-winning beekeeper and honey-maker. He credits his father for teaching him how to act around bees from an early age, and says that he has been keeping bees on his face from the age of seven.

"My father's advice always comes to my mind and eliminates any nervousness or fear," says Nature MS. "My father always advised me to be calm with the bees and treat them like a friend. He also asked me to take deep breaths and never lose patience or give in to fear."

Nature MS had his first experience of being covered by bees when he put a queen bee on his hand - and a swarm soon followed.

"They were on my hand in search of the queen and to protect it. The next day I tried a similar stunt with the queen on my head and within moments my entire head and face got covered," he says.

According to Euro Weekly News, he can now let 60,000 of the buzzing creatures cover his face without any hesitation, and says that he has a special bond with them.

Two years ago, he also attempted the world record to raise awareness about the importance of bees and apiculture.

"People are often scared about bees because they sting," says Nature MS. "Honeybees are the key insects in society, it is our duty to protect them. Without honeybees, the earth could not sustain us all."